Skip to main content
“Turn the Tide” grassroots and community coalition protest on the steps of New York City Hall includes signs shaped like life preservers calling for sustainable energy and affordable housing as part of the recovery process. (cc) Max Liboiron, 2013.
From the Field

The Two Sandys framework: a disruptive event vs. an exacerbation of systemic inequalities

The first way of understanding Sandy is as an acute, disruptive event. This perspective is most common among governing and elite institutions such as large NGOs and foundations, the entities that exercise the major share of authority and influence at the municipal and state levels. It understands Sandy as a severe, but relatively short-term, interruption of normal city functions and focuses largely on physical infrastructure. The recovery goals inherent in this frame have been to repair interruptions to the pre-storm status quo of New York City as a stable, global cultural and economic center as quickly as possible, with a significant focus on strengthening infrastructure.

The second way of understanding the storm, most common among community groups and grassroots political networks, is that Sandy sharpened and exacerbated systemic problems. This perspective sees Sandy’s impact as intensifying an ongoing crisis stemming from social and economic inequality. The recovery goals inherent in this frame are focused on pairing shorter-term triage with longer-term transformations of the underlying sources of vulnerability and economic insecurity, namely inadequate housing, precarious employment, and inaccessible essential services.

The different concepts of crisis we term the Two Sandys have led to different types of responses. New York City’s mayoral After Action Report (2011), for instance, identifies problems beginning days before the storm that could be addressed by technical fixes in the near future, including evacuation orders, gasoline shortages, and power outages (Gibbs and Holloway 2013). City and state governments have devoted substantial planning efforts to long-term reconstruction after Sandy, the bulk of which initially focused on returning to and safeguarding—rather than changing—the social and economic status quo. Both of these examples are characteristic of the first perspective on Sandy.

Meanwhile, grassroots and community-based organizations (CBOs) have focused more on how the storm has exacerbated vulnerability via a deepening of income insecurity, insufficient access to education, unaffordable housing, and widespread debt. For many communities, “back to normal” does not mean recovery, but a return to vulnerability. Thus, organizations like Alliance for a Just Rebuilding—a coalition of faith groups, labor unions, community groups, and environmental organizations—explicitly point to the need for good jobs, affordable housing, renewable energy, accessible health care, and community consultation for recovery plans (Alliance for a Just Rebuilding 2013).

Housing provides perhaps the most telling example of Sandy’s effect on existing inequalities, as well as the ways in which the city’s response has ended up prolonging chronic crisis. The storm destroyed or damaged 305,000 housing units in New York City. Poor and working class New Yorkers, especially tenants, immigrants, and people of color, have struggled disproportionately to repair their homes, echoing trends documented in the aftermath of Hurricane Katrina in New Orleans (Merdjanoff 2013). A report from Alliance for a Just Rebuilding found that lower-income homeowners are getting virtually no government funding, despite over $3 billion in federal aid to the city for disaster recovery (Alliance for a Just Rebuilding 2014). Municipal documents reveal that only 110 of 19,920 registrants for the Build it Back program, or 0.55%, have been awarded a grant so far, and in January 2014—more than two years after the storm—construction had not begun on a single house. [3] Since then, however, mayor Bill de Blasio’s administration has slowly managed to accelerate the rebuilding process (Buettner and Chen 2014).

In the case of public housing, more than 80,000 New Yorkers living in over 400 New York City Housing Authority (NYCHA) buildings lost key services like electricity and elevators when the storm struck. According to a survey of nearly 500 NYCHA residents, 55% had repair needs in their dwellings before Sandy, 40% developed new needs because of Sandy, and 62% were told they would have to wait six months or more for repairs. The table below shows, for example, how Sandy worsened widespread preexisting mold contamination (Alliance for a Just Rebuilding et al. 2014). 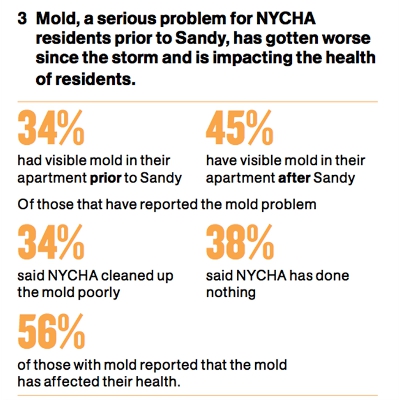 The Two Sandys framework illustrates the distinct ways that New Yorkers understood Hurricane Sandy—understandings that form the basis for subsequent actions. But the Two Sandys framework also points to a more systemic approach, which understands environmental disasters as both sharpening (in the short term) and exacerbating (over a longer stretch) preexisting inequalities not only locally but also on a more global scale.

Locally, in New York City, community groups that have poured research and organizing resources into housing advocacy played an instrumental role in electing New York’s new mayor, Bill de Blasio. The new city government has shown much more interest than the previous administration in the intersection between Sandy recovery, long-term disaster preparedness, and equal access to housing (Beck 2014). Elections matter. Even so, it remains too soon to say whether the de Blasio administration will succeed in implementing the real, lasting improvements to the economic and social security of lower-income New Yorkers that the administration says are now a priority.

More globally, while we focus on the Two Sandys in New York City, there was also yet another Hurricane Sandy, which hit Haiti and other coastal countries before making landfall in the United States. Haiti’s Sandy killed 52 people, flooded most of the south end of the country, and displaced tens of thousands of families, adding to the 400,000 people that were already displaced and living in camps after the 2010 earthquake and the 7,500 Haitians killed by the 2010–2013 cholera epidemic (Rosen 2012). In large part thanks to climate change, for Haiti, New York, and most of the world, regular disasters are the new normal.

A just response to extreme weather, at the global scale and in the long run, means that New York must do more to pioneer a socially equitable form of low-carbon urbanism. It is imperative that long-term social and economic justice work be clearly connected to efforts to reduce greenhouse-gas emissions—which are on track to cause many more Sandys, especially devastating to places like Haiti (and the Philippines, and Somalia, etc.). Directly and indirectly, wealthy New York firms and individuals bear disproportionate responsibility for climate change, but remain relatively insulated from its effects (Cohen 2014). [4] This call dovetails with wider efforts in disaster research and politics to push for expanding definitions of disaster to include long-term, chronic, slow-moving crises with a focus on populations that shoulder the brunt of everyday pollution, the effects of climate change, and environmental illness, among other systemic traumas.

Disasters don’t just leave infrastructure in rubble. They also illuminate the moments when our usual forms of intervention fail to address a devastating problem. New systems, communities, and policies must emerge as the old systems are overwhelmed by social and physical change. Within this paradigm, the systemic inequities that Sandy laid bare occurred long before the hurricane hit. The goal of our Two Sandys framework is to direct the focus of policymakers and other decision-makers to the systemic social crises that extreme weather sharpens and exacerbates.

[1] The co-authors’ names are listed in alphabetical order. Max Liboiron and Daniel A. Cohen made equal intellectual contributions and wrote the article together, based on research produced collectively by the Superstorm Research Lab (www.superstormresearchlab.org), of which they are co-founding members.

[2] Our findings are based on collaborative efforts of the Superstorm Research Lab to conduct nearly 80 interviews with actors in local and state governments, a range of civil society groups, volunteer first responders, and ordinary New Yorkers hit hardest by the storm. We also draw on ethnographic fieldwork, document analysis, and collaborative research with scholars and community organizations.