Who Stays and Who Leaves? Residential Flows in French Shrinking Cities

With the growing literature on the subject of shrinking cities, it has become easier to gain a more detailed understanding of the causes of urban decline: globalization (and the associated increases in flows of people and investment), deindustrialization and suburbanization (Oswalt 2006). However, the consequences of this phenomenon, besides population loss, are significantly absent from these analyses. By focusing on residential flows in shrinking cities, this articles aims to deconstruct one of the processes of urban shrinkage by identifying the individuals who stay in these cities and those who leave. In a political and economic context where geographical mobility is encouraged, though the financial and cultural resources it requires are unevenly distributed among social groups (Rémy 2000), our analysis explores more specifically the selectivity of residential flows. The behaviour patterns of different social groups regarding residential mobility will be compared between growing and shrinking cities, taking into account not just the influence of territorial features, but also the fact that residential flows impact the attractiveness of these territories (Lelévrier 2010).

A lack of attractiveness in French shrinking cities

While the causes and expressions of urban decline can vary from one city to another, all shrinking cities share the same defining criterion, namely loss of population (Haase et al. 2016). This loss might be due to a relatively high number of deaths exceeding the number of births, or to the effects of migration, where the departures outnumber arrivals. In the case of France, the population loss in shrinking cities [1] results mostly from a migratory deficit (Rudolph 2015; Wolff et al. 2013). Net migration rates [2] in these cities are therefore negative, whereas in growing cities, the number of arrivals is greater than the number of departures. However, both growing and shrinking cities in France have positive natural growth rates, with a number of deaths lower than births. Relatively high levels of fertility in France (around two children per woman) explain this situation, resulting in a population that is increasing at the national level (Prioux 2007). The different demographic patterns between growing and shrinking cities can therefore largely be explained by the migratory factor, namely the ability of a city to hold on to inhabitants or attract new ones. 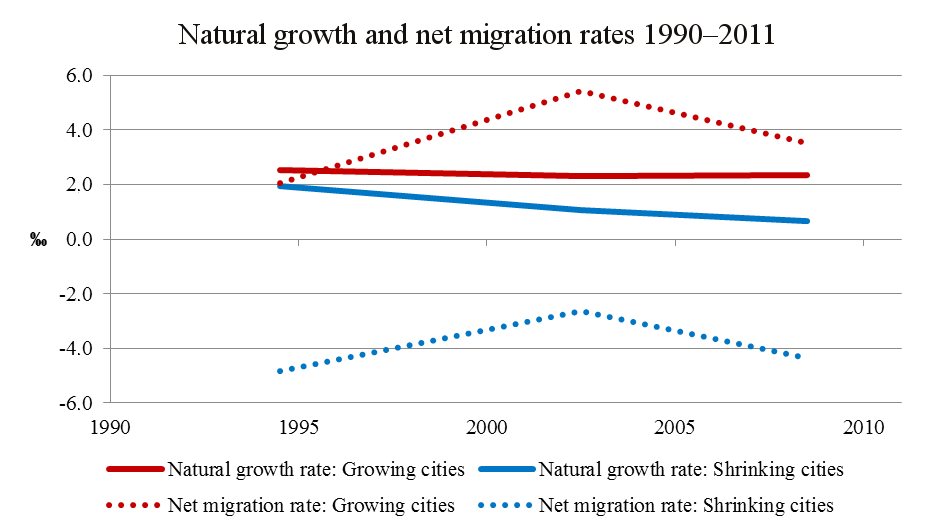 The vast majority of French shrinking cities suffer from a migratory deficit (Rudolph 2015). These “unattractive” cities are mainly located in the northern, north-eastern and central regions of France (Figure 2). These towns and cities include, for instance, Le Havre in Normandy, the Lens–Douai conurbation in the far north of France, Charleville-Mézières in the Champagne region, and Thionville in Lorraine. Their geographical location reflects the processes of deindustrialization that have occurred in these old industrial areas, combined with the effects of metropolization, which weaken these generally small and medium-sized cities that are less well integrated in terms of flows of capital, investment and population (Alexandre et al. 2010; Paulus 2004).

Figure 2. Net migration rates in French functional urban areas (metropolitan areas) between 1990 and 2011, and population of these areas in 2011 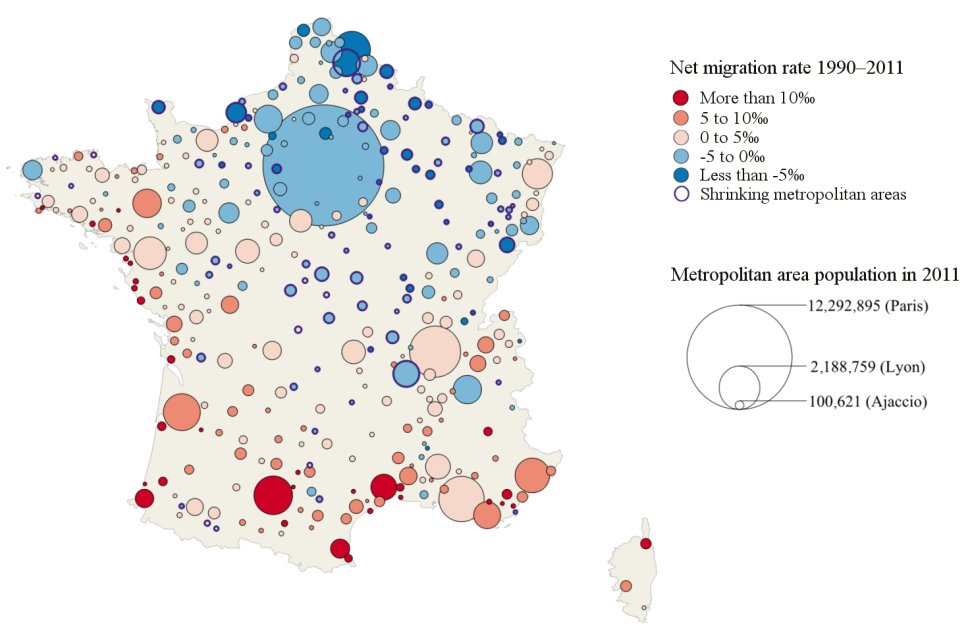 Shrinking cities’ migratory deficits can result from different factors: the mass departure of inhabitants, low numbers of new residents, or a combination of the two.

When distinguishing out‑migration flows from in‑migration flows, the latter are not simply lower than the former in shrinking cities, but are also significantly lower than the equivalent values in growing cities: in‑migration rates in shrinking cities between 1990 and 1999 and between 2001 and 2006 were respectively 22‰ and 26.7‰, compared with 26.7‰ and 33.3‰ for growing cities (Figure 3). By contrast, out‑migration rates were similar in both types of cities. Shrinking cities therefore have not experienced mass departures, but rather have suffered from a lack of attractiveness resulting from a deficit of new residents. 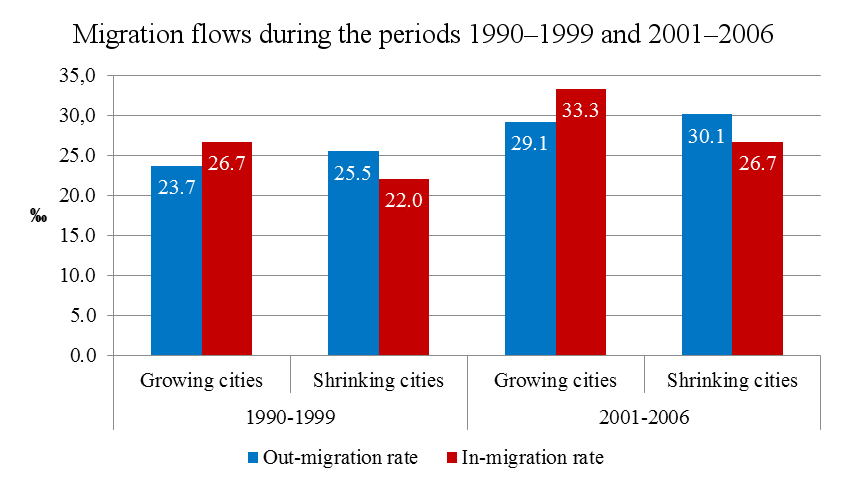 If shrinking cities do attract less people, what are the characteristics of these people? Do individuals who avoid (or, at least, are not drawn to) shrinking cities have a particular profile, or does the lack of attractiveness of these cities concern all types of individuals? Residential mobility is a selective process: factors such as gender, age, household type, as well as level of education and occupation, do not all bestow the same ability to migrate (Debrand and Taffin 2005). The older an individual, the less likely he or she is to be involved in residential flows, just as someone with a higher-education diploma is more likely to migrate than an individual without any qualifications (Vignal 2006).

Here, we shall focus on indicators relating to individuals’ level of qualification, occupation and age, with the aim of determining whether residential flows are similar in shrinking and growing cities.

While the social selectivity of residential flows occurs in both types of cities – meaning that the most qualified and highly educated individuals are also those who are most likely to migrate – this selectivity is heightened in contexts of urban shrinkage. In particular, those social groups least likely to migrate, namely manual workers and individuals without qualifications, are even less mobile in shrinking cities. Out‑migration and in‑migration rates of manual workers, for instance, stand at 33‰ and 35‰ respectively, which is almost 5 points below the equivalent rates in growing cities. Conversely, the most mobile populations – executives/managers and individuals with higher-education qualifications – are much more likely to either leave shrinking cities or choose not to settle in a shrinking city, instead favouring growing cities. In‑migration rates for these population categories are 10 points higher in growing cities (around 65‰, versus 55‰ in shrinking cities) (Figures 4 and 5). This key specificity of executives’ migration strategies has also been observed in the Ruhr region of Germany, where shrinking cities lost 10% of their population of executives and managers between 1975 and 1986, whereas the rest of the Land (North Rhine–Westphalia), more economically dynamic than the Ruhr conurbation, recorded an increase of 1.4% (Friedrichs 1993). These trends can be explained in part by the specificity of local labour markets – the number of executive and managerial jobs increased faster in major French cities than in the rest of France between 1999 and 2013 (Lainé 2017) – but also by the deterioration of the urban environment (increased residential and commercial vacancy rates) and the stigmatization that can affect cities in decline.

Figure 4. Out-migration and in-migration rates by education level in growing and shrinking cities between 2001 and 2006

Figure 5. Out-migration and in-migration rates by occupation in growing and shrinking cities between 2001 and 2006

Figure 6. In-migration and out-migration rates by age in growing cities (left) and shrinking cities (right) between 2001 and 2006

This reinforced selectivity of migration results in populations deficits and/or gains for different social groups that vary considerably between growing and shrinking cities. Growing cities tend to attract more young adults and population groups at the top of the social hierarchy, such as executives/managers and individuals with higher-education qualifications. Net in‑migration rates for these groups, resulting from the difference between in‑migration and out‑migration rates, stand at around 7‰, compared with only 4‰ and 2‰ respectively for intermediate professions and manual workers. In shrinking cities, the difference is even more pronounced, and the net in‑migration rate for executives/managers is negative (-9‰), indicating a significant deficit of new arrivals. This kind of situation can be observed, for instance, in the urban areas of Lens–Douai (in northern France) and Nevers (in Burgundy), where the in‑migration rates for individuals with higher-education diplomas stand at -5.2‰ and -7‰ respectively, and at around -9‰ in both areas for executives and managers. While shrinking cities are losing population in every category, the scale of these losses is highly variable: significant deficits can be observed for young adults, executives and managers, and individuals with high levels of qualifications, whereas the deficits for over-60s and manual workers are minimal or even non-existent (Figures 4, 5 and 6). Accordingly, towns such as Montbéliard in Franche-Comté or Soissons in Picardy have experienced an increase in their population of manual workers, but a strong decline in numbers of managers and executives.

A non-neutral loss of population

The demographic decline of shrinking cities is anything but neutral in social terms: different social groups are not concerned to the same extent or in the same manner, as residential flows lead to a selection of individuals who are likely to stay in shrinking cities on the one hand and those who are likely to leave these cities on the other. This loss of population mostly concerns people aged 20–40, higher-education graduates, and executives/managers, who are the most prone to leave shrinking cities. In the long term, it is the last of these categories (executives/managers) that is increasingly underrepresented in the population of shrinking cities: 12%, compared with 25% for growing cities (Cauchi-Duval et al. 2016). While this difference can partly be explained by the size of shrinking cities, which are generally smaller than growing cities, it also reflects the dynamics of social specialization and impoverishment at play in shrinking cities. The selectivity of residential flows therefore presents an additional challenge for these cities, which are currently trying to adapt and reinvent their industrial economies by transforming their industrial heritage into touristic or educational facilities, for instance. Furthermore, these economic and sociodemographic changes will in all likelihood also induce important political change in French shrinking cities in the future.

[1] In this article, the term “shrinking city” refers to functional urban areas (metropolitan areas) in France that lost population between 1990 and 2011. This period of analysis was chosen as it covers recent trends with regard to urban shrinkage, a process which gathered speed in the mid‑1990s in Europe.