Social housing in Europe: the end of an era?

Noémie Houard & translated by Oliver Waine - 26 September 2012
Lire en français
Although there is no single European model for social housing, there are nevertheless a number of common trends and features in most countries in Europe: delegation to local government, a new focus on fragile populations, reductions in the proportion of social housing. In France, the welfare state is tending to break with its “universalist” vocation in order to target action on increasingly vulnerable populations.
decentralization / social diversity / social housing / welfare state / right to housing / Europe
Download PDF

Most works and studies concerning social housing in Europe stress the diversity of approaches and concepts adopted in each country. [1] In recent years, following the economic crisis, various EU directives and a number of international factors, social housing systems have changed radically and countries have had to tune their responses in accordance with their respective histories and social-protection regimes.

The question of who constitutes the target population social housing, in particular, is at the heart of recent European decisions. Single-market and competition regulations have meant that countries where social housing is open to the whole population, such as the Netherlands or Sweden, had to revise their systems in early 2011. In France, all laws relating to social housing adopted since 2007 also have to move towards greater social specialisation in public housing, albeit for different reasons. This is the case in particular for the “DALO” (droit au logement opposable) law, which instituted the enforceable right to housing.

These trends raise a number of questions: is the role of social housing being refocused on those in greatest difficulty? What are the effects of decisions taken at European level? And are we seeing a convergence of social housing models in Europe?

Social housing in Europe: a variety of national situations

The term “social housing” has no common definition across Europe. Sometimes it refers to the legal status of the landlord, sometimes to the rent regime (e.g. whether or not rents are at sub-market rates), sometimes to the way it is funded, and finally, in almost all countries, to the target population. A considerable diversity of approaches are in evidence, as shown by the varying amounts of social housing (as a proportion of all housing stock) in each country: the Netherlands has a very high proportion of social housing (34%), followed by the United Kingdom (21%) and France (20%). Luxembourg and countries in Southern Europe, on the other hand, have very small stocks of social housing – less than 5% of the total – and Greece has none at all.

Segmentation of housing stock in the 27 EU member states 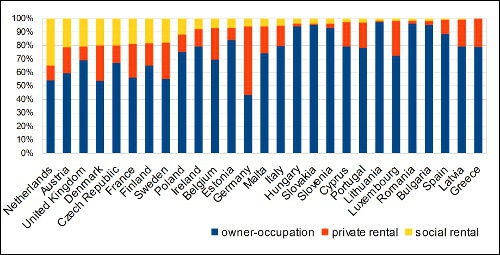 A similarly diverse range of situations exists regarding the allocation of social housing, with national approaches being more or less finely targeted. Laurent Ghekiere identifies three models: “universal”, “generalist” and “residual” or targeted. [2] In certain countries, social housing is theoretically accessible to all (Sweden; Netherlands until 1 January 2011). In France and Germany, social housing is open to a broad section of the population, but access is means-tested and restricted by priority-related criteria. Elsewhere, social housing is primarily intended for those who cannot afford housing via other routes (United Kingdom, Ireland, Hungary).

A growing focus on vulnerable populations

If we look beyond these variations, an overall trend can nonetheless be observed in Europe, namely that social housing is increasingly concentrated on the most vulnerable populations (Lévy-Vroelant 2011). Sometimes this shift takes place at national level, sometimes more locally, at the level of individual housing complexes and estates. In these cases, the trend can be explained by the economic crisis. It may also be linked to national decisions, such as the “right to buy” scheme [3] implemented in the UK, which, while benefiting those able to buy their home, has led to increased impoverishment and segregation for those who cannot.

However, in certain countries with a “universalist” tradition, this change is, in part, the result of a convergence process in Europe. This process was triggered by decisions that have been made following instances of distortion of competition observed by the European Commission, even though the Commission’s remit does not include housing. In this connection, two cases have already had a real impact on the role of social housing: in the Netherlands, a maximum income limit of €33,000 per household per annum has been introduced (with the effect that now only 41% of the population are eligible for social housing [4]). Sweden preferred instead to open up all public housing to the market rather than comply with the conditions imposed by the Commission in exchange for the provision of government aid. [5]

Nevertheless, in most EU countries, the social rental sector has decreased as a proportion of all housing: social-housing construction has not kept up with the overall housing production rate, and many social-housing units have been either demolished or privatised (Scanlon and Whitehead 2010, p. 19). As far as the sale of social housing is concerned, the UK has clearly been the front runner with its right-to-buy scheme, which has led to the sale of more than 1.6 million housing units since 1979. Certain other countries also went down this path in the 1990s, such as the Netherlands. Others, such as Denmark or France, [6] are just starting to experiment with this concept. Lastly, in Germany, private-sector housing has long been the norm, as social housing is only “social” for a limited period, with some 100,000 units passing into the private housing sector annually.

The French system: an unhappy medium?

Some figures relating to social housing in France

Demand: 1.2 million households in 2010 (including 550,000 requests from households that are already social-housing tenants)

Situation regarding the “DALO” law at year-end 2010

Households rehoused as a direct or indirect result of the “DALO” law: 35,000

Judgements against the French state for failing to provide suitable proposals within the deadlines laid down by the law: 5,585

In many regards, France occupies an intermediate position.

Income distribution of social-housing tenants between 1973 and 2006 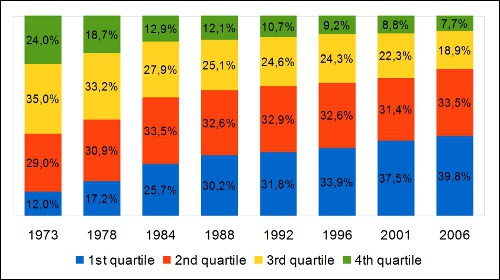 This situation leads to a reinforcement of inequalities between territories. In areas of high demand, housing supply is particularly inadequate in view of the number of housing requests. Similarly, construction in the social rental sector always has difficulty making sufficient progress in those areas where supply is lowest. [9]

Although there exists no single European model for social housing, the social housing stock in Europe nonetheless tends to accommodate more and more vulnerable populations, and is seen as an increasingly residual part of housing policies in most EU member states. The direction that social housing should take and whom its target should be are questions that are more open-ended than ever.

In 2012, debate in Europe on the matter is likely to still be fuelled by the eagerly awaited ruling from the Court of Justice of the European Union concerning the role and duties of social-housing structures. The Dutch debate continues between the European Commission, the Dutch government, private investors and social landlords. [10] The outcomes of these two debates will show whether the economic crisis – which has upset the economic, social and political balance in Europe – has led to a reversal of the trends observed in the first decade of the 21st century.

[2] Laurent Ghekiere (2008), permanent representative of the USH (Union Sociale pour l’Habitat – Union for Social Housing) to the EU in Brussels.

[4] Decision of the European Commission in December 2009 approving the modifications of the social-housing system in the Netherlands proposed by the government (Whitehead 2011).

[5] In Sweden, the authorities never use the term “social housing”, deemed to be stigmatizing, and instead prefer the concept of “public housing”, which refers to rental housing managed by municipal housing companies. For further information, see Ghekiere 2011.

[6] An agreement was reached between the USH and the French government in December 2007. The measure implemented differs from the British right-to-buy scheme, as it is HLM (social housing) bodies that decide which housing units are to be put up for sale. Only 4,900 housing units were sold in 2007, and around 6,000 were sold in 2008. In its 2012 election manifesto, the conservative UMP party announced its intention to introduce a “right to purchase” social housing, based on the British right-to-buy scheme.

[8] See the many regulations introduced since the circular of 16 September 2009 relating to access to housing for people in emergency accommodation, up to and including the decree of 15 February 2011 relating to the allocation procedure for social housing and the enforceable right to housing.

[9] Although many towns have exceeded the objectives laid down by the SRU (Urban Solidarity and Renewal) law of 2000, which imposes a minimum of 20% social housing in certain municipalities (broadly speaking, towns with at least 3,500 inhabitants that form part of a wider urban area of at least 50,000 inhabitants, and towns in Greater Paris with more than 1,500 inhabitants), over a third of the municipalities affected still have not achieved this goal. In 2008–2010, 940 municipalities were concerned by this regulation: 591 have achieved the objective set, while 349 are still failing, to a greater or lesser extent (Fondation Abbé Pierre 2012, p. 160).

[10] The European debate on the nature of specific tasks assigned to social-housing organisations by member states was raised by Dutch social landlords for arbitration before the judges of the Court of Justice of the European Union (Case T202-10). In early 2012, the Court rejected the Dutch social landlords’ case; they are now appealing this decision. With regard to the Dutch income ceiling, which stands at €33,000, it is currently the subject of negotiations between the Dutch government, the social landlords and the European Commission: as a result, this ceiling could be raised and/or opened to regional variations. 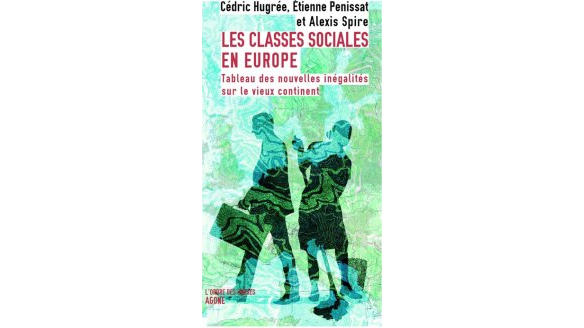 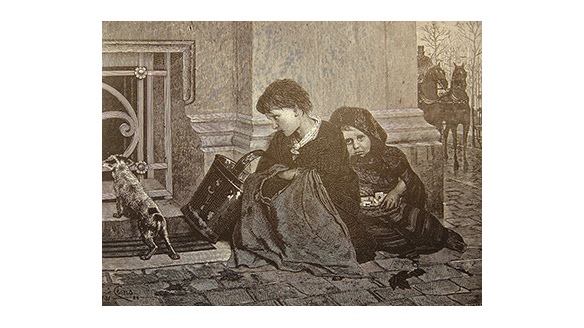