The example of “accessory apartments” in Ontario
Anastasia Touati & translated by Oliver Waine - 5 June 2013
Lire en français
Against the backdrop of a housing crisis, a number of local authorities in Ontario, Canada, have developed policies to encourage the creation of “accessory apartments” or “secondary suites” – in other words, new dwellings within single-family homes. Anastasia Touati analyses the advantages, as well as the ambiguities, of this novel form of residential densification.
housing / density / housing estates / densification / subdivisions / crisis / affordable housing / Canada
Download PDF

Urban densification: a range of possibilities

For the last 15 years, densification has been at the heart of sustainable urban development policies (Charmes 2010; Jenks 2000; OECD 2012). This term covers a wide range of methods and measures. In suburban areas with mostly single-family homes, it depends to a large extent on the local context and the legal and operational tools used (Darley and Touati 2011). For example, it is possible to densify by acting on the urban forms created or by relaxing planning permission via changes to the rules laid down in the local master plan; or, instead, by focusing on forms of “soft” densification (Touati 2012), typically at the initiative of owners of houses who wish to divide their plot, with the aim of building a new home (Sabatier and Fordin 2012); or, finally, as in Canada, by choosing a third option based on increasing the residential density of a neighbourhood without changing the overall built density, through the construction of “secondary suites”. Unlike the processes studied in the BIMBY research project, this form of densification occurs without plot division and is based on a rental model rather than a build-to-sell approach.

An original response to the housing crisis?

Since the early 1970s, the progressive reduction of the size of Canadian households and growth of the country’s population have led to a significant increase in demand for smaller dwellings. The lack of an adequate housing supply has resulted in a continual rise in property prices and an unprecedented housing crisis, which reached its peak in the late 1980s (Tomalty 1997).

In this context, under the influence of “smart growth” [1] principles, many Canadian provinces committed themselves early on to policies that sought to diversify housing supply through better use of existing resources. In English-speaking Ontario, the most populous province in the country (with around 13 million inhabitants), located in east-central Canada, a comprehensive housing development policy was initiated in the early 1990s. In particular, this included encouraging municipalities to identify, in their official plans, areas where residential densification might be encouraged through various means: infill development, [2] the conversion of non-residential land to residential use, and also the creation of “secondary suites”. The last of these corresponded to the common – but until then illegal – practice in Canada of creating additional housing inside or outside a detached house.

And so, in 1994, the centre-left provincial government (affiliated with the New Democratic Party – NDP) adopted the Residents’ Rights Act, which authorised the creation of a new dwelling in all detached houses, provided that health and safety standards were respected, regardless of any other policy that might be implemented by the municipality in question. [3] For the government, these “accessory apartments” were deemed a “benign” form of densification (Tomalty 1997) as they made it possible to produce housing without, however, changing the outward appearance of neighbourhoods.

More specifically, this policy was based on the possibility of creating a secondary unit in all detached single-family houses in all Ontarian municipalities. Such units are defined as self-contained dwellings, separate from the main dwelling and with their own kitchen and bathroom. It may be located in the main building, either upstairs or in the basement (Figure 1), above an adjoining garage, or in an additional building erected within the same plot of land. The aim is not only to provide new affordable rental housing, while providing additional income for homeowners, but also to help make optimal use of existing infrastructures and networks, while increasing the density of residential neighbourhoods whose population is declining and/or ageing. Because of their generally lower quality than other types of housing, accessory apartments are considered “affordable” [4] dwellings by the Ontario provincial government, i.e. housing units accessible to low-income households. The situations that lead to such suites being made available are varied: older people renting out part of their home to a student in exchange for personal care services; parents wishing to provide their children with an independent dwelling; or households having difficulty repaying a mortgage who choose to rent an apartment to another low-income household, for example.

Figure 1: Diagram showing a secondary suite in the basement of a detached home 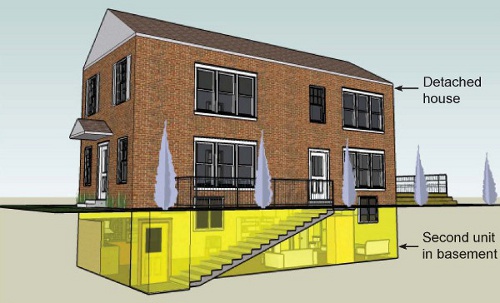 Disputes and legislative delays result in only partial implementation

Following the creation of this policy, numbers of secondary suites have increased, perfectly legally, in Ontario, primarily in suburban municipalities, but also in low-density neighbourhoods of large cities. For example, in Guelph, a university city of 100,000 inhabitants located 100 km west of Toronto, the zoning regulations have authorised the development of accessory apartments in all low-density residential neighbourhoods since 1995. As a result, a hundred or so new secondary suites have been recorded every year since, representing around 10% of new housing supply. This policy has become an important component of the city’s affordable housing strategy.

But the initiative put in place by Guelph’s local councillors is the exception rather than the rule: the secondary suites policy has been the subject of a number of disputes. The Residents’ Rights Act, which allows exemptions from municipal zoning regulations, was seen by many as an attack on the elected local planning process (Tomalty 1997, p. 87). The opposition was particularly strong in low-density municipalities with affluent populations, who considered that the affordable nature of secondary suites would open the way to unwanted student and/or low-income populations. Concerns also related to the potential impact of these apartments on architecture and streetscapes, increased traffic levels, the loss of privacy for existing residents, and even the emergence of overcrowded slums (CMHC 2004).

After the defeat of the NDP in the 1995 elections and the arrival of the Conservative government (led by the Progressive Conservative Party of Ontario), the province introduced an amendment that once again gave municipalities the right to ban secondary suites. Although a number of authorities chose to retain the measure, most new secondary suites in Ontario once again became illegal.

The return of secondary suites 15 years on, or the ambiguities of “affordable” housing

Fifteen years later, the provincial government, now led by a centrist party (affiliated to the Liberal Party of Canada), has yet again decided to legislate on this matter, as part of its strategy for affordable housing in Ontario (Affordable Housing Act, 2011). An amendment requires municipalities to establish regulatory mechanisms allowing the insertion of secondary suites in new and existing buildings. It also introduces the possibility of developing garden suites or granny flats, which are temporary dwellings that are independent of the main house (Figure 2) and which may be leased for up to 20 years. 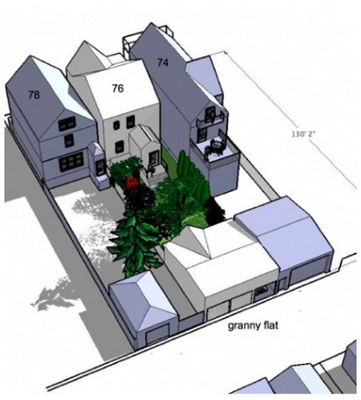 This comeback is due to a change in the perception of secondary suites: in a context of economic crisis, they are now considered an important option not only for providing more affordable housing for low-income groups, but also for providing additional income to homeowners having trouble paying their mortgages.

Nevertheless, this return to favour has not occurred without raising numerous questions in the process. First, the “affordable” nature of secondary suites is not subject to any checks or controls by the public authorities. Indeed, in Ontario, this category of accommodation includes both social housing and privately rented housing. The latter does not benefit from subsidies of any kind and their rents are not capped: they are considered affordable only because of their inferior quality compared to other types of housing. Second, the creation of housing through this secondary suites policy depends exclusively on the initiative of private individuals. The municipal government plays a regulatory incentive role, but it is the “owner-developer” and the other private stakeholders involved in property development (housebuilders, real-estate agents, etc.) who are directly in charge of the actual densification process. The system is therefore based on a rather liberal approach to building new homes; however, many authors believe that the province and municipalities tend to rely on this measure as a palliative for the decline in traditional public-sector production of social housing (Hackworth and Moriah 2006; Sousa and Quarter 2003). Indeed, in some municipalities, almost all affordable housing now produced are secondary suites. Ultimately, while this production depends on the market, and therefore the willingness of homeowners to build and, above all, maintain a secondary suite, is there not a risk that this form of housing might completely replace the production of social housing?

[1] The “smart growth” theory posits that dense and mixed growth should be concentrated in existing urban centres, so as to facilitate sustainable transport modes such as walking and cycling and combat urban sprawl (Downs 2005). Consequently, it is often considered the North American equivalent of the “compact city”.

[3] Canada has a federal political system. Each province and territory constitutes a state in its own right with its own parliamentary regime. The provinces and territories play a major role in the drafting and implementation of urban policy; they determine the overall framework within which lower levels of government must work. A number of authors hold the view that municipal authorities, deprived of any real autonomy, are simply the “creatures” of the province (Keil 2002).

[4] For the Ontario provincial government, the notion of “affordable housing” has a precise definition. It means:“a) in the case of ownership housing, the least expensive of:

b) in the case of rental housing, the least expensive of: 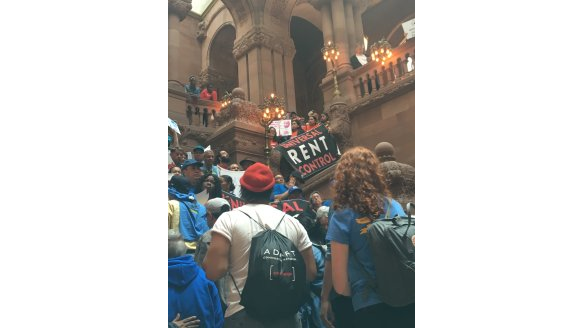 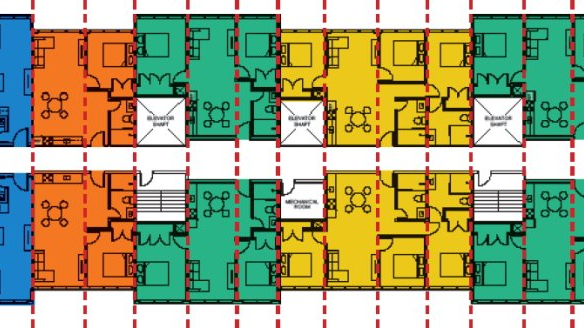 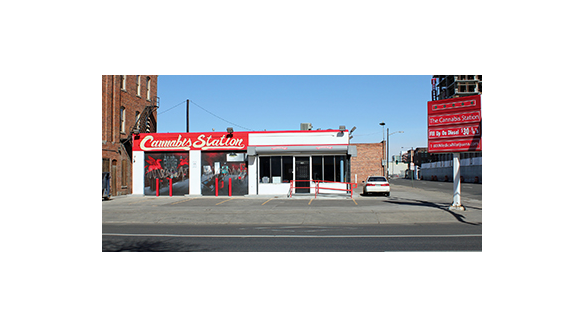