Skip to main content
© Sofya Aptekar
From the Field

Social Norms and Resistance on the City Bus

Sofya Aptekar - 5 May 2015
While subways are hailed as the quintessential New York experience, with their own museum, T-shirts, and lore, the city’s buses often get forgotten or, worse, imbued with a reputation of lawlessness due to its often poor and minority riders. Sofya Aptekar counters this common myth by showing how social order and morality play out among diverse populations on the buses of Astoria in Queens.
public space / ethnicity / public transportation / transport / minorities / mass transit / race / bus / civility / Astoria / New York / Queens
Download PDF

“Only black people take the bus.” This pronouncement came from Levent, one of my students in an adult English class in Queens, New York City, a few years ago. I had been studying public spaces in the neighborhood of Astoria, and was becoming increasingly interested in public buses. It seemed that local residents associated this form of transportation with a particular set of race and class representations. Yet my observations as a passenger on the buses that traversed the neighborhood complicate some of the prevailing narratives. In addition to being places of racialized danger, buses can be parochial spaces that reinforce local ties and mainstream social norms. What’s more, I observed that public buses could be sites where people bend the rules to help each other in desperate times.

When it comes to public icons, it is New York’s subways that come to mind. However, the notorious alphabet soup of subway lines does not reach all New Yorkers, particularly in the fringes of outer boroughs. Even in Astoria, Queens, where the midtown Manhattan skyline is within sight, many residents rely on the plodding public buses to get around.

When Levent, a part-time taxi driver, made that racializing reference to local buses, he did so in a room full of Latino, North African, Southern European, and Asian immigrants, a mix of origins that has brought Astoria a reputation of diversity. Local politicians and developers frame and commodify this diversity as one attractive feature of the gentrifying neighborhood. In a context of diversity and gentrification, the association of buses with “black people” highlights an unsung feature of Astoria: the classic New York segregation of African-American and Puerto Rican residents in public housing along a waterfront that was strewn with polluting industry before becoming an attraction. And it is these locals, living far from rail lines and services, who rely on buses the most. 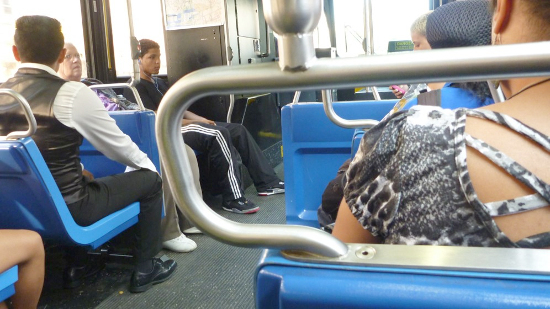 At the other end of the economic spectrum, a subset of New Yorkers, particularly the hip denizens of Brooklyn or the yuppies of gentrifying Queens, dismiss the bus as a transportation option, preferring the subway, a long walk or bike ride or, increasingly, Uber taxis. In a pattern certainly not unique to New York, traveling by bus is associated with marginalized populations such as poor minorities, the elderly, and youth.

Levent learned about the blackness of buses and racialized “danger zones” around the public housing development from a co‑ethnic friend when he first moved to Astoria. Buses are public spaces in motion, moving through raced and classed spaces of neighborhoods as they pick up and drop off their passengers. Before crossing 21st Street, which has long marked a zone associated with public housing and danger, and in which Levent settled upon his arrival in New York, the riders are predominantly black and Hispanic. On the other side of the street, it picks up more whites, Asians, and North Africans. By the time it crosses under the elevated train tracks, it is predominantly white, with a large proportion of elderly people and immigrants.

A parochial space of urban civility

When I began to take the bus regularly, I found that it could become a parochial space where neighbors and familiar strangers interacted, often with conviviality (Lofland 1985). Unlike train operators, bus drivers are physically accessible to the passengers, which makes conversation and the formation of ties possible. An older African-American man who sat outside a bodega adjacent to a bus stop would offer coffee to a female African-American bus driver as she pulled up and opened the doors. Some passengers knew their regular drivers and their habits, and some drivers knew their regular passengers, kidding them about their purchases and routines.

Local news coverage of buses is usually confined to fatal accidents and violent acts committed by passengers and drivers, which contributes to constructions of buses as criminal spaces. I observed passengers disregarding rules about eating, drinking, and listening to music, but they proactively enforced other rules. People policed norms around seats accessible to riders who were elderly, disabled or with young children. Not only did most passengers reliably vacate marked seats as soon as these riders boarded, they collectively engaged with these passengers in facilitating their mobility and comfort. When a wheelchair-bound individual boarded the bus, which meant a delay and loss of seats, passengers actively assisted the driver and the disabled passenger, and chided people for being less than accommodating. This high level of helpfulness exceeds many expectations of urban civility, let alone civility on the supposedly lawless public buses.

Teenagers and moral order on the bus

The most visible spectacle of unruly behavior on the local bus took place every weekday during the school year, as large groups of predominantly African-American and Latino high-school students boarded the bus on their way home. [1] The visual and auditory display created by these adolescents temporarily overwhelmed other patterns of sociability on the bus. The dozens of students yelled profanities inside and through the windows, played music, moved unpredictably, made out with each other, and consumed food and drink. The spectacle they created was noticeable from outside the bus, which helped label it as a racialized space of chaos and danger, contributing to “wilding” discourses that equate such behavior with criminality and immorality among youth of color (Welch, Price and Yankey 2004).

I found that below the surface of this kind of exuberant violation of norms of bus riding and public-space civility, these young bus passengers actually enforced many mainstream norms. One afternoon, I sat in the back of the crowded bus, while four African-American boys talked loudly nearby, lacing their speech with profanity. Other passengers ignored them in what was a typical display of civic inattention (Goffman 1963). One of the boys, holding his low-riding pants with one hand to prevent them from dropping to the floor, spotted an African-American girl walking outside the bus. Pointing her out to his friends, he remarked that even though she was probably only 12, she was “hot”. His friends heaped abuse at him, yelling that there was something wrong with him, that the girl was only 12. One said that his sister was 12. The chastised teenager attempted to defend himself by saying that he would not “do that” to his friend’s sister, only to this girl none of them knew. Another boy in the group then had the final word when he said that the girl was “somebody’s sister.”

Another time, the bus filled up with a group of African-American girls yelling amicably to each other. One girl wanted to get to a seat next to an older South Asian man. She indicated her intentions by gesturing forcefully close to the man’s face. The girl’s companions watched the man leave his seat and walk to the front of the bus and turned on her, calling her crazy and rude. In both examples, the young bus passengers are violating many norms of bus riding, which create an overwhelming sensory experience for fellow passengers and even those seeing and hearing the bus from outside. Yet, below the surface of these transgressions, they are upholding a conventional social order, despite common narratives that would position them as unruly.

My observations as a bus passenger in Astoria complicate the stories of public buses as sites of social disorder. I was also able to document a range of practices that fall under Lisa Dodson’s (2013) characterization of the moral underground, where people subvert the system to help economically vulnerable others. A swipe of the ever more costly MetroCard or exact change is required to board the bus. Unlike in the subway, where riders move through turnstiles and are watched over by police or cameras, bus drivers often exercise discretion in enforcing payment. I observed drivers waving on people who were short on their fare, or looking the other way when people did not have the fare at all. Some passengers would plead their case discreetly by whispering to the driver and employing contrite body language, and be allowed to board with a quick nod of the driver’s head. I saw these practices with different drivers and passengers of different ages, races, ethnicities, and genders, although there were some drivers who seemed to yell at anyone attempting to board without a full fare.

Passengers also helped other passengers in ways that subverted the rules. When paying with coins instead of a MetroCard, one can get a free transfer, which works on intersecting bus routes for two hours. This transfer can be shared with others, allowing them to board without paying. On one occasion, I stood behind two seated elderly passengers who appeared to be strangers. The man asked the woman in a heavily accented English whether she had paid for the bus. She, much more fluently, responded: “Yes, what else?” He then slipped her two transfers from his pocket, keeping them partly hidden, saying: “Here, take.” She thanked him quietly, and said she was going to the pharmacy and then the hospital because her chest was no good. The man nodded, inserting remarks in a language that sounded like Greek, until the woman got off the bus at the next stop. Thus, both among passengers and between passengers and their drivers, the bus can become a place of solidarity, where rules that are enforced elsewhere are bent to help others get by in a city of economic extremes.

Marginality and disorder imbue the symbolic meanings of the public bus in New York. Buses are avoided and stigmatized by some city residents, especially by those with other transportation options. However, the research I conducted on buses in Astoria, Queens, reveals a social order with high levels of helpful behavior, evidence of a moral underground and class solidarity, the bolstering of local ties, and the enforcement of mainstream norms by those most stigmatized as lawless.

[1] For a fictional film treatment of teenage behavior on a New York City bus, see Michel Gondry’s 2012 film The We and the I (www.michelgondry.com/?cat=61).