Skip to main content
East New York in 2015 and a post-rezoning rendering. Source: New York City Department of City Planning
From the Field

The Cost of Affordability: Inclusionary Zoning and Displacement in East New York

Population growth and a steady increase in housing costs since the mid‑1990s has led to a crisis of housing affordability and access in New York City. To address this, Mayor Bill de Blasio’s administration has embarked on an ambitious campaign to generate 300,000 units of affordable housing by 2026. A key strategy to achieve this goal involved the adoption of the Mandatory Inclusionary Housing (MIH) program, a zoning tool which allows for substantial increases in residential density in exchange for affordable housing. However, the application of MIH in largely low-income, majority non-white areas has heightened the risk of residential displacement in these communities, with the affordability requirements doing little to mitigate this threat for many of the city’s lowest-income residents.

New York City’s MIH program has included rezoning proposals for the low-income neighborhoods of East New York, East Harlem, Inwood, Downtown Far Rockaway, Flushing West, and the Jerome Avenue corridor, while avoiding proposals for low-density, transit-rich areas like Forest Hills, which appear to be good candidates for MIH but are largely white and middle- to upper-class. In 2016, the first MIH rezoning was approved in East New York, located at the eastern edge of Brooklyn. The city contends that the upzoning will be a cost-effective means of building much needed affordable housing and fostering income diversity in the neighborhood. Yet many community organizations and residents opposed the plan. To this end, the Coalition for Community Advancement: Progress for East New York/Cypress Hills (CCA)—an umbrella group bringing together local community development corporations, religious institutions, arts organizations, businesses and residents—engaged the local community directly to produce an alternative neighborhood plan. They identified a need for affordable housing that far exceeds what the city plan projects, noting that “the threat of displacement is real—evidenced by recent speculation and tenant harassment.” They argue that the rezoning would not create enough housing at affordability levels that are appropriate for the area’s lowest-income residents, instead triggering widespread displacement reminiscent of past rezonings in New York City.

Figure 1. East New York in 2015 and a post-rezoning rendering

For the first half of the 20th century, East New York was an ethnically diverse community, with many German, Italian, Russian, and Polish immigrants calling the area home. Nearly all of East New York was redlined in the 1930s, and property values and building quality began to decline. In the postwar period, Black and Puerto Rican residents seeking low-cost housing were drawn to the area, and real-estate brokers responded with an aggressive blockbusting campaign. This marked the beginning of a rapid and pronounced neighborhood change in which widespread white flight occurred, with the racial makeup of the area transforming from 85% white in 1960 to 80% Black and Puerto Rican by 1970 (Thabit 2003). At this time, Black and Puerto Rican homebuyers were commonly targeted in predatory mortgage scams in which unqualified recipients were fraudulently approved for loans; when mortgage payments became untenable, they would be forced into foreclosure (Gottlieb 1986). During the fiscal crisis of the 1970s, East New York was further subject to the systematic reduction of essential services as part of a deficit-closing effort known as planned shrinkage. With limited rental income available and fire services all but non-existent, abandonment and arson became a common occurrence, and empty lots proliferated where residential buildings once stood (Flood 2010). 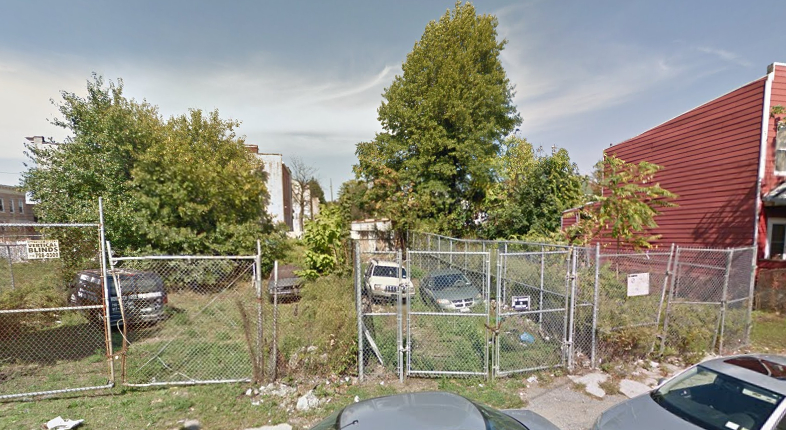 In the following decades, several community development corporations pursued affordable housing development in the neighborhood, including the construction of thousands of affordable units through low-density infill projects like the Nehemiah plan, and there was a substantial return of middle-income residents to the area through the early 2000s. Yet East New York remains one of the most economically challenged neighborhoods in New York City. The neighborhood was hit hard by the 2008 subprime mortgage crisis, and by 2010 had the highest rate of foreclosure filings per 1,000 residents in New York City (DiNapoli 2011). Under these housing and economic conditions, the city announced the rezoning plan in 2014, with a stated goal of addressing “the need for affordable housing citywide and in East New York to foster a more livable, safe, vibrant neighborhood for all residents” (NYCDCP 2015).

Measuring the threat of displacement for East New York residents

To evaluate the residential displacement impact the rezoning could have on “all residents” of East New York, the study from which this text is drawn [1] employs a risk-assessment model based on prior gentrification and displacement research (Freeman 2005; Chapple 2009; Bates 2013; Chapple and Zuk 2016). It looks at neighborhood indicators correlated with likelihood to be displaced, including percentage of renters, percentage of non-white residents, percentage of residents with a bachelor’s degree or higher, and median household income, and compares these indicators to citywide figures.

The East New York area [2] registers as at risk in all four indicator categories when compared to the rest of New York City, with pronounced vulnerabilities based on a high concentration of low-income, non-white residents (Figure 3).

The housing stock in East New York adds further vulnerability, as roughly 61% of housing units are located in one- to four-unit buildings, compared to 39% in New York City as a whole (ACS 2015). Tenants in one- to four-unit buildings are excluded from New York City’s rent regulation laws, a crucial bulwark against residential displacement. These factors indicate a population in East New York that, when compared to the average resident of New York City, has a limited ability to remain in place if the rezoning were to generate a significant increase in housing costs. While any development taking advantage of the upzoning must make one quarter of its units available to households earning an average of $51,540 annually, the median income for a household of three in the area is just $33,431. Even the affordable units constructed through MIH would be out of reach for approximately half of the 180,000 current residents of East New York (ACS 2015).

Figure 4. One- to four-unit buildings in East New York 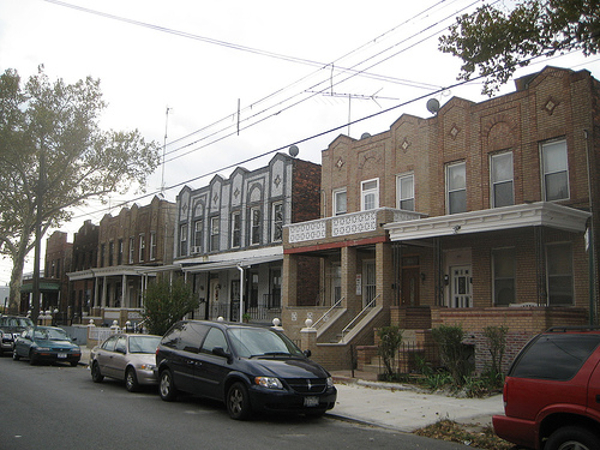 The announcement of a proposed rezoning by the city in 2014 appeared to trigger new interest and investment in the East New York real-estate market, which continued through the rezoning’s approval by New York City Council in 2016. During that period, there was a significant increase in the “flipping” of one- to four-unit buildings, where properties are bought and resold within a single 12‑month period, as well as an increase in building sale prices, suggesting that the rezoning itself was already contributing to a heightened climate of residential displacement risk before significant new housing construction even occurred. Furthermore, the rezoning was designed with a contextual element that was meant to limit the scale of development on side streets, where most one- to four-unit buildings are located. That smaller buildings are already being targeted by investors suggests that the contextual zoning is not protecting these buildings from development pressure nor protecting tenants from the threat of displacement.

In terms of new construction, the East New York [3] rezoning proposal set off a wave of housing development on a scale that had not been seen in the area in years. From 2015 to 2016, there was an incremental increase in new residential building permits of 160% in East New York, with permits filed for over 800 new residential units, while New York City as a whole experienced a net decrease of 70% during the same period (Figure 4). Due to the weak East New York housing market, most of these units are likely to have been subsidized by the city and will therefore have affordability requirements attached to them. However, most East New York residents earn household incomes that would still cause them to struggle with the cost of housing, even in these designated “affordable” units. 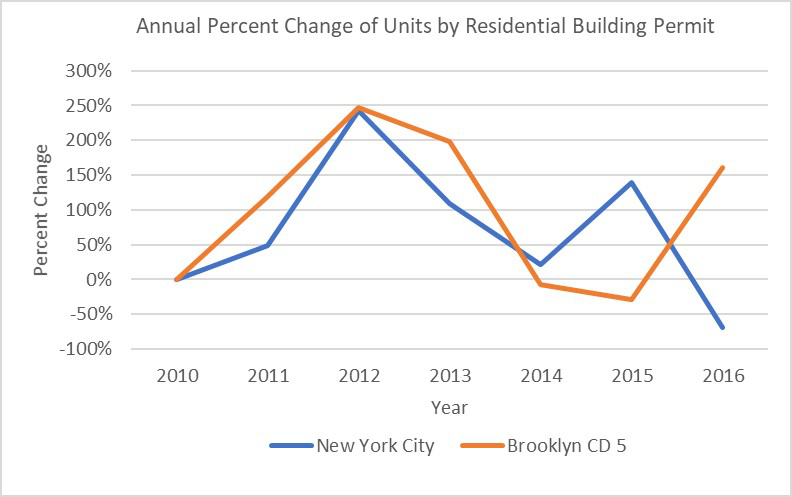 There are a number of issues with the way MIH is being implemented in New York City. In East New York, neighborhood residents are at a heightened risk of displacement. The affordable housing that has been built since the rezoning was announced, as well as that which will be required through MIH in the future, does not provide deep enough affordability to adequately address the housing cost burdens these residents are grappling with currently, let alone in a scenario where mixed-income development causes housing costs to increase more dramatically. The fact remains that the rezoning of East New York for a progressive affordable-housing initiative could conceivably trigger the displacement of a large Black and Hispanic community that would further intensify the racial segregation of urban space in New York City.

MIH represents an important step in asserting the concept of affordable, quality housing as a right in New York City, and the decision to codify mandatory affordable housing production into the zoning text of one of the largest real-estate markets in the world should be commended. However, a need remains for deeper affordability requirements, stronger anti-displacement protections for existing residents, and an expanded role for not-for-profit housing developers and alternative ownership models. Further, the near-exclusive implementation of MIH in low-income communities of color speaks to a larger issue of equity and distributive justice that the city’s housing plan must grapple with, moving forward.

[1] This article draws from my master’s thesis in city and regional planning, submitted to Pratt Institute in February 2018.