Taking Research to the Streets

Jonathan R. Wynn & Richard E. Ocejo - 9 June 2015
Residents of iconic neighborhoods in New York City have grown accustomed to walking tourism in their midst—clumps of curious observers and amateur historians following a knowledgeable guide who points to signs of the past in the contemporary landscape. This multimedia article follows sociologists Jonathan Wynn and Richard Ocejo on a tour whose subject is both the East Village neighborhood and the phenomenon of the walking tour itself. We follow the guides from Astor Place to the Bowery, via Tompkins Square Park and Houston Street, stopping in at culturally significant bars along the way.
gentrification / night / tourism / walking tour guides / bars / East Village / nightlife / United States / New York
Download PDF

On February 28, 2015, Jonathan Wynn and Richard Ocejo led a group around the East Village to experience the sights and sounds of this historically and culturally meaningful district of Manhattan. Wynn drew from his study of walking tourism, published as The Tour Guide: Walking and Talking New York (2011, University of Chicago Press), and Ocejo drew from his work on bars, nightlife scenes, and gentrification in downtown neighborhoods, published as Upscaling Downtown: From Bowery Saloons to Cocktail Bars in New York City (2014, Princeton University Press).

Figure 1. Route of the walking tour 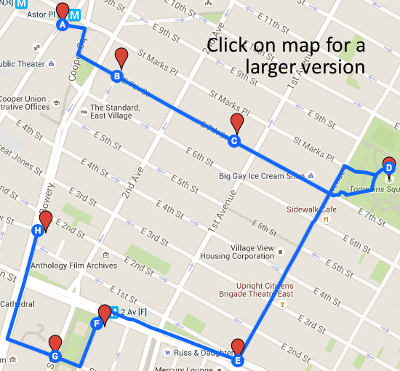 A walking tour affords participants the chance to occupy the physical spaces they discuss. Walking tours and pub crawls match intellectual ideas with visceral, lived moments. This “tour about tours” and “pub crawl about pubs” drew out historical and cultural data and paired them with new experiences for participants, making East Village history more present. By walking and talking in public spaces, the tour-crawl also highlighted the importance of public spaces in the East Village: from the free library in Astor Place to the Tompkins and Roosevelt parks to the semi-public spaces of bars like McSorley’s and the Blue and Gold Tavern. The same can be said in reverse. The East Village provides a rich set of historical moments and cultural places within a dense few blocks, an easily navigable path allowing us to illustrate the development of the neighborhood over the last century, the importance of culture to the area, and the tensions between grit and glamour, ethnic history and real-estate development, and the pros and cons of gentrification. Perhaps most of all, the East Village holds sites and sights we knew would be educational, entertaining, and intellectually accessible. As a form of “public sociology,” walking tours offer social scientists an outlet for embedding a broad audience in the contexts they examine.

At the end of the tour, the author-guides talked about the neighborhood, their research, and the success of the walking-tour phenomenon as part of the New York City tourist experience.

Stop 1. The Alamo and Astor Place

Video 1. Introduction to guides, walking tours, and the East Village;talking about Astor Place

Jonathan Wynn: We begin at the former site of the recently displaced Alamo cube in the center of Astor Place It was a good to start because it’s a site of history (e.g. the Disaster Place Riots), culture (e.g. the sculpture and mosaic work on civic hardware such as lampposts by Jim “The Mosaic Man” Power), nightlife (e.g. nearby German beer gardens and Irish pubs, 1960s hangouts, Skid Row bars, and punk rock clubs), and public education (e.g. the Astor Library, which sowed the first seeds of the New York Public Library, and the Cooper Union). We also needed to start at a subway line: If you are going to have people meet you for a tour in New York, it’s easiest to start at a subway station.

Richard Ocejo: Furthermore, this spot contains many themes of the tour. All the ethnic, religious, political, and working-class groups who lived and worked in the neighborhood left behind physical reminders of their presence.

Video 2. Not getting into McSorley’s

RO: Some of the longtime downtown residents I interviewed spoke frequently and admiringly about the vibrancy of nightlife in the area. They would refer as far back as the 19th century, when it was characterized by working-class and immigrant groups. So our second stop, at McSorley’s Old Ale House, fit perfectly. I conducted an interview in McSorley’s with a local resident, historian, and activist who told me:

This was pretty much the original nightlife capital of New York City and all that, as you know, and therefore, of this country. Yiddish theatres, Italian operas, oyster bars, brothels, everything else, nightclubs, all of those types of things that were going on down here in the 1800s while it was very working-class and all that. To blow off steam, and all that, like pour whiskey right out of the jug… this is the genesis of modern-day, working-class, multiethnic America. This is the melting pot.

With today’s gentrification and fancier nightspots, McSorley’s is hailed for its stubborn commitment to the neighborhood’s cultural past. 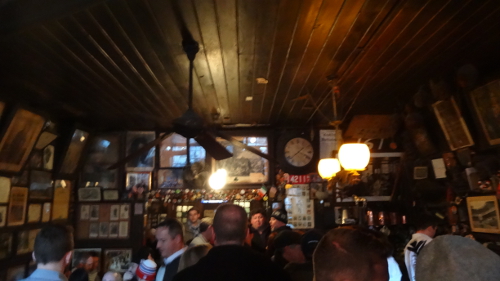 Video 3. The Blue and Gold

RO: Walking east on 7th Street, we traveled to the East Village’s post-World War II period. At this time, the area was known as “Little Ukraine” for the many immigrants who fled the Soviet Union and settled there. There are several remaining establishments that reflects their history, including restaurants, the Ukrainian Museum and the Blue and Gold Tavern. Named after the colors of the Ukrainian flag, Blue and Gold opened in the 1960s. It became a favorite for incoming artists in the 1980s, who shared the space with aging Ukrainian men. Blue and Gold maintains its status as a cheap dive, with only a few old-timers still coming in.

JW: From the southwest corner of Tompkins Square Park, we could see the Pyramid Club, a hotspot for the drag and gay scenes of the 1980s and the place where Nirvana and the Red Hot Chili Peppers played their first New York gigs. We also saw 151 Avenue B, the former home to jazz legend Charlie Parker. This Gothic Revival-style rowhouse was built in 1849 and deemed a New York City Landmark in 1999. Was there a highlight moment for you, Rich, that connected your research? 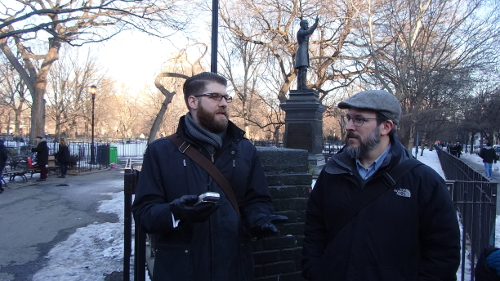 RO: Probably Tompkins Square Park—about halfway through the tour. Many residents spoke almost fondly for the 1970s and 1980s, when the area was crime-ridden and drug-infested and the park was a dangerous place. But to them, the negative conditions provided the backdrop for creativity in art and music. The park is symbolic of so much of the East Village’s gentrification. Today, nightlife revelers traverse the park to get to their next destination, while the neighborhood’s remaining drug addicts continue to hang out on the sidewalk. During the day, it serves as a temporary soup kitchen for the homeless as well as a playground for young wealthy families. The park allowed me to point out how these different social actors interpret and attempt to coexist and share the same space, with mixed results.

Stop 5. Houston and Avenue A

Video 5. Manhattan is the new Brooklyn?

JW: One of the benefits of a walking tour is that it affords the guide the chance to juxtapose historical epochs through the visual landscape of the city. On our tour there was a moment—at the corner of Avenue A and Houston—where we could see how nightlife and music can relate to urban revitalization. The Mercury Lounge is as close to a perfect small music venue for New York. The Ludlow exploits the hipness of the area by advertising that it “connects the buzz of the neighborhood with the tranquility of home.” Juxtaposing the elements of urban contradiction is a classic tour-guide trick, and after giving this tour I can see why. 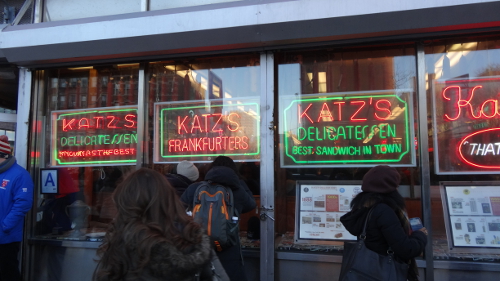 JW: In addition to Yonah Schimmel’s Knish Bakery on Houston Street, another great “tour-guiding moment” was the Sara D. Roosevelt Park story, which is one of the tales a fantastic guide (and currently my colleague in the history department at the University of Massachusetts Amherst), Jennifer Fronc, relishes to tell. Through their battles over New York public spaces and development, Moses and Roosevelt never liked each other. Roosevelt advocated for parks and low-income families and often roused public opposition to Moses’ urban planning. Moses justified the destruction of affordable housing for low-income residents by saying it wasn’t “slum clearance” but for a public park Roosevelt couldn’t argue against. To complete the rhetorical coup, Moses used his power to name the park after Roosevelt’s mother-in-law, whom Eleanor didn’t get along with. It’s a story of gamesmanship playing out on the spot, and she told me it was a favorite tale.

Stop 7. CBGB and the Bowery

JW: In some ways, I feel the Bowery is the height of incongruity in the neighborhood.

RO: The most interesting of these cases for me is the Bowery Hotel, an exclusive boutique hotel with rooms starting at $400 a night, that is located directly across from the curiously named Whitehouse Hotel, a former flophouse for homeless men. The marked differences between these two buildings and what they signified about the neighborhood are evident. However, even the Whitehouse has been transformed from a flophouse to a youth hostel catering specifically to foreign travelers and students.

I began my research downtown by studying the last of the Bowery’s Skid Row bars, Milano’s, which is located just off Bowery on Houston. Like the Bowery itself, Milano’s is a sort of microcosm for downtown’s transformation. It began as a place for Italian immigrants, then became a bar for homeless men, and then became a local hangout for the neighborhood’s early gentrifiers in the 1980s and 1990s. Today these latter two groups are joined by young visitors who are attracted to the bar for its “authenticity.”

RO (cont’d): New cocktail bars, the Bowery Hotel, and stores like John Varvatos create a physical sense of “downtown luxury” that has defined the area in the last decade. In his work on the neighborhood’s gentrification, Christopher Mele points out how symbols of downtown bohemia, like subversive art, political and cultural resistance, and a working-class lifestyle of gritty tenement living, became marketing tools by real-estate developers and city leaders in the 1980s and 1990s—a reversal of how such symbols have normally been treated by people in power (2000). Nightlife downtown today, as evidenced by the Bowery, has eschewed the neighborhood’s historical bohemianism and working-class spirit to provide upscale products and services for clienteles who may or may not know anything about the area’s history.

JW: What do you think is the allure of the pub crawl?

RO: I wondered if interest stemmed from a desire to experience the city in a unique way—through a walking tour—or if it was the East Village, in particular. An important goal for me was to show that consumption spaces, such as bars, are not by-products of neighborhood reinvestment, as gentrification scholars such as Neil Smith (1996) would suggest. Rather, they are important catalysts for gentrification and unique lenses for understanding the process.

JW: Guides who lead walking tours enact much of what interested us in doing this exercise: to get the stories off the page and into the streets. On the sidewalk, we were able to talk about the importance of public culture while demonstrating how it can be used. The streets and parks were important places for the free exchange of history and storytelling, and that shouldn’t be lost in today’s overly commodified urban spaces. The tour brought our research to life, hopefully in a fun fashion.