The movement for low-income housing in the United States traditionally has been dominated by liberalism. Top-down, centralized institutions led by experts and insulated from grassroots political pressure have managed the project of developing below-market housing stock. In many cities in the 1970s, however, a counter-tendency emerged, based in neighborhoods, which sought to revitalize them by providing housing through sweat equity and self-help.

The contemporary community land trust (CLT) movement continues that tradition, seeking a community-based system of land ownership and housing governance. The success of this movement depends on understanding the dynamics of communities, and the conditions in which they emerge and flourish. We also must reckon with how communities interact with the challenges of contemporary affordable housing: what are the obstacles to community control within a professionalized, neoliberal industry, and how can institutions of community control create better housing stock for our cities?

But to think about the “community ownership and control” which is the aim of a land trust, we need to think about community. I became interested in the dynamics of urban community during the Northern Manhattan is Not for Sale campaign against the rezoning of Inwood, which was active between 2016 and 2018. That rezoning targeted one of the remaining pockets of industrial zoning in Manhattan for conversion to high-density residential development. A coalition of core organizers, with roots in local institutions and citywide tenant organizations, drew on a repertoire of rhetoric that recruited a variety of potential activists. Our slogans included neighborhood attachment (“Save Uptown”) and anti-capitalism (“Not for Sale”), and thus mobilized people motivated by sentimentality, ethnic pride, and anti-establishment feeling, as well as simple NIMBYism. Over the course of the campaign, new affiliations were born. Personally, through my involvement in this campaign, I drastically altered my networks of political connection and friendship, developing relationships across racial difference and with deep local roots. My experience is reflected in the changed nature of neighborhood organizing: people have mobilized around rent-law reform, started reading groups, and joined political campaigns.

We were not simply giving voice to a community that already existed; we were making community as we fought for change. It increasingly became clear to me that our only responsible mode of using the word community was as born out of common struggle. Other uses, which do not acknowledge its emergent character, either paper over differences – for example, describing uptown as integrated when it is not – or play into fetishized, backwards-looking definitions. This is not to say there are no uptown communities. There are schools, congregations, livery-cab drivers, tenant associations, etc. There is, however, a unitary uptown community only in an aspirational sense. As this particular movement coalesced around the threat of change, and organized against displacement and housing need, it brought this aspiration closer to reality.

This winter, fellow students in Hunter College’s Master’s in Urban Policy and Planning program and I formed a team for a national competition, the Bank of America Merrill Lynch Low-Income Housing Challenge: a competition in which undergraduate and graduate students put together proposals for housing for low- to moderate-income residents. The explicit purpose of the competition is to attract students in planning, architecture, and policy to the field of affordable housing finance. The principle foci of the challenge are the finance plan and the design. It is a controlled environment where those elements are valued and reviewed by a team of professionals, while participants can ignore political challenges or the realities of the land-acquisition process. This is consistent with the experiences of many housing professionals, who work closely with lenders and in spreadsheets, but are not expected to organize communities or engage with political movements.

Grounded in Hunter’s advocacy planning tradition, our team was determined to develop a plan that was not just technically viable, but also genuinely responsive to community input. So we chose a city-owned site that had been the focus of community organizing in Washington Heights, and worked with the Riverside–Edgecombe Neighborhood Association (RENA), which had led a campaign to build low-income housing on the lot, and with the Community League of the Heights (CLOTH), a local mission-driven nonprofit, to ground our project in local needs and vision. We agreed to use the community land trust model of ownership and governance.

The project site is a lot near the Hudson River that is owned by the city and held by the Department of Transportation (DOT), which once used it for its Safety City program of youth traffic-safety education; today it uses the lot to park trucks. RENA launched a petition in 2017 to transfer the lot to the NYC Department of Housing Preservation and Development (HPD) and a local CLT for low-income housing. They gathered over 1,000 signatures for the petition and gained the support of Councilmember Mark Levine and Manhattan’s borough president, Gale Brewer. But the mayor’s office was nonresponsive, and DOT commissioner Polly Trottenberg insisted the lot was needed for essential agency functions. We chose this site for our entry into the Low-Income Housing Challenge not only to develop our own capacity as housers, but to provide momentum to this stalled campaign. While the city could ignore RENA’s campaign under the pretext that they have no experience in housing provision, or that they are purists with no appetite for compromise, we created a realistic plan in partnership with a local developer that was satisfying to RENA.

Our final product is a 21-story tower with 180 units of housing affordable for households with incomes between $28,161 and $59,541, as well as 30,000 square feet (2,800 m²) of community and commercial space and space for a garden. Our team architect produced a steel-and-glass modular design that adheres to Passive House standards for energy efficiency. We designed nonresidential functions including a lounge, terrace, and fitness center for residents, meeting rooms, a kitchen, and a community garden for the public, an office for the CLT, and rented commercial space for a nonprofit, a daycare center, and a grocery store. Just as the vision of the CLT model integrates a broader community into the governance of its housing, so do the spaces of Safety City Houses, which are meant to encourage community building (though this can never be achieved by architecture alone).

Figure 1. Architect’s rendering of the final product at Safety City 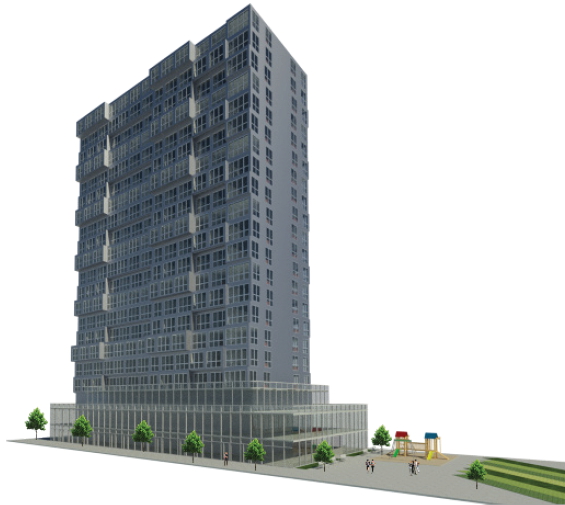 All housing is expensive to build. We needed to attract investor equity as well as city subsidy. The financing is a mix of Low-Income Housing Tax Credit (LIHTC) equity and loans from the city’s HPD and Housing Development Corporation (HDC). LIHTC equity is investment by a bank or a corporation, which makes the investment in exchange for a tax credit. It is an impressive apparatus of public–private governance, dependent on private investors and maintained by a panoply of lawyers, syndicators, and other professionals. The HDC and HPD loans, by contrast, are subsidized, below-market loans that either have reduced interest rates or suspend payment of interest entirely. This combination of private equity and government-subsidized debt yields a “realistic” plan to create housing for people whose incomes do not even begin to cover market rents in New York City.

What is housing realism?

But what does the imperative to be realistic about affordable housing production mean for the community-based housing-justice movement?

The high capital costs of affordable housing have produced a complex industry, replete with administrative rules and regulations, extensive documentation, and public–private coordination. There is a high bar for entry. Community groups need to do a lot of work to maintain a substantial degree of nonprofessional involvement in the housing process. If an organization is dedicated to participatory democracy, it may be hard to do much without compromising that commitment.

Our financing structure was deeply reliant on HDC and HPD for subsidies and reduced cost loans. This is not unique; these city agencies have a great deal of power in New York’s affordable-housing sector. Sometimes they use it for good; interest-only loans can be used as leverage to make sure low-income housing developers comply with their mission—or be forced to pay the principal. They also require the inclusion of three-bedroom units in developments financed through the ELLA (extremely low- and low-income affordability) term sheet, which helps counteract the incentives of per-unit subsidies towards smaller units.

But they also stifle creativity, and threaten the vitality of community movements. One of the members of the CLOTH development team had an original idea: instead of maintaining the units as rental housing, why not build a 15-year transition to ownership? It would set aside a portion of the cash flow to help tenants become cooperative owners at the end of a period of time. This idea was shot down by HDC; their 30-year regulatory agreement requires units to remain rentals throughout the term of the agreement.

Another major obstacle to community-powered housing is the lottery that HPD uses to house New Yorkers. If you build a community movement to advocate for housing in your neighborhood, those new units will be distributed to applicants from across the city via the lottery process. There are many great reasons to uphold this system, which limits nepotism, patronage, and outright racism. But it also means that if you organize a community around a housing development and you succeed, members of the community cannot be beneficiaries of the victory (except by coincidence). [1] The people, relationships, and common struggle that characterize that community movement will give way to a new assortment of people who have yet to form common bonds and may not wish to. This is a messy contradiction for a movement that is inspired by ideals of community self-help but which must work within the confines of housing liberalism.

The world of housing has changed a lot since the early days of self-help community-controlled housing in the 1970s, when volunteers at organizations like Banana Kelly could rehabilitate an entire block of multifamily housing by themselves. There is a lot more capital at stake, and a lot more bureaucratic control. Exercises like the Bank of America Low-Income Housing Challenge help train professionals into a field where dynamics of community are an afterthought compared to design guidelines and financing plans. In order for the movement for community land to achieve its vision, we need to make the case for the distinct advantages of community control. We also need to train ourselves to recognize and cultivate the conditions under which communities emerge across difference, and understand what makes those communities necessary for successful urban housing. We need to prepare to demand concessions from housing bureaucracy in order to accommodate those distinct conditions. Without those efforts, community control will mean nothing at all.

[1] Harry DeRienzo addresses this issue to an extent in this op-ed about the controversial community-preference policy: https://citylimits.org/2017/08/15/cityviews-missing-the-target-on-segregation.