Building a Resilient and Equitable City: How to Advance Environmental Justice Through the OneNYC Plan

Climate change poses an acute threat to coastal cities, and New York City is no exception (Rosenzweig et al. 2015; New York City Panel on Climate Change 2015). Threats from climate-change impacts and extreme weather events include flooding and storm-surge inundation, extreme heat, power outages, food shortages, toxic exposure, and limited government operations—in a city where environmental-justice (EJ) communities already experience disproportionate health burdens. Although climate change will have severe and long-term effects on all New York City residents, neighborhoods where historic patterns of environmental burdens have disproportionately affected low-income communities and communities of color are at greatest risk (Bautista et al. 2016). For example, NYC’s Significant Maritime and Industrial Areas (SMIAs), which cluster potentially noxious and polluting uses and infrastructure, are all vulnerable to storm surge and flooding, and are located in predominantly low-income communities and communities of color (Bautista et al. 2015a). Additionally, research has shown that the majority of Superstorm Sandy’s victims were low-income New Yorkers (NYU Furman Center 2013). Resiliency usually refers to the capacity to “bounce back” after a disturbance, but for environmental-justice advocates, bouncing back to inequitable systems that disproportionately affect people of color is unacceptable. For true resiliency to exist, we must “bounce forward” to systems that place equity and social justice at their core. How can we institutionalize protections that safeguard the health and safety of the most vulnerable populations against the risks posed by climate change, while creating opportunities to bounce forward to economic justice?

Many cities are beginning to address issues associated with equity, climate justice, and environmental justice by incorporating them into citywide sustainability plans (Warner 2002; Pearsall and Pierce 2010; Rosan 2012; Boone 2013; McPhearson 2014; Jabareen 2015). Yet, traditionally, community-based resiliency plans from EJ advocacy groups and vulnerable communities often have not commanded much attention from planning officials (Rosan 2012; Angotti 2008). As a result, the role of equity has been shortchanged in public-policy discussions about sustainability (Pearsall and Pierce 2010). Often, the level of community engagement provided is simply not enough to influence the decision-making process. While present-day planning favors technical expertise, scholars and activists argue that local and community knowledge should be fully incorporated into planning through inclusive decision-making and many opportunities for community oversight over project implementation (Maantay 2002; Rosan 2012; Bautista et al. 2015b).

With Mayor Bill de Blasio’s OneNYC: A Plan for Strong and Just City, released on Earth Day 2015, New York City introduced equity as a guiding principle in one of its sustainability and resiliency plans for the first time. This article assesses the success of that plan in incorporating key equity and environmental-justice principles in its first two years. It draws on the New York City Environmental Justice Alliance (NYC‑EJA)’s NYC Climate Justice Agenda, released in April 2016, which addresses the vulnerabilities of low-income neighborhoods and communities of color to climate-change impacts. While OneNYC made great strides in laying out the City’s vision for a more just and sustainable city, there are several places in which the plan and its implementation can be strengthened to more effectively address climate justice.

New York City has inequitably allocated funding for coastal protection projects, leaving many climate-vulnerable neighborhoods ill-equipped to handle future storms. Nearly four years after Superstorm Sandy, neighborhoods in Lower Manhattan have secured over $800 million from the US Department of Housing and Urban Development’s (US‑HUD) Community Development Block Grant Disaster Recovery Program (CDBG‑DR), and City capital-funding streams for coastal resiliency (City of New York 2016a). By contrast, Hunts Point, an industrial waterfront neighborhood in the South Bronx, for example, has received only $45 million for both coastal and energy resiliency projects—with an initial $20 million in CDBG‑DR from US‑HUD’s Rebuild by Design competition, and an additional $25 million allocated from the City, also from CDBG‑DR funds. Importantly, the Hunts Point Food Distribution Center, through which the majority of the city’s food passes, is also vulnerable to flooding and storm surge.

Figure 1. Comparison on funding for coastal-protection projects in New York City by borough 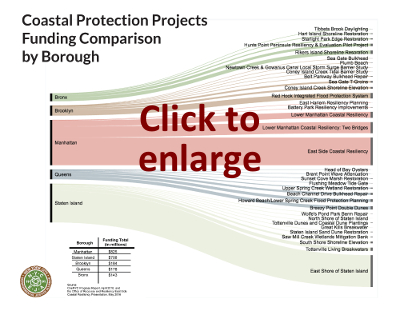 The need for coastal protection is critical in the SMIAs, where the clustering of potentially noxious and polluting infrastructure poses high risk for potential toxic exposure in future climate events (Bautista et al. 2015a). The SMIAs, including Hunts Point, encompass over 4,000 acres (1,600 ha) of land, are located in predominantly low-income communities and communities of color, and are all vulnerable to storm surge as projected by the New York State Office of Emergency Management (Bautista et al. 2015a). While some key SMIAs, such as Red Hook, have received substantial investments for coastal protection (over $100 million for an integrated flood-protection system), other SMIAs (like Newtown Creek and the North Shore of Staten Island) have received minimal resiliency and coastal-protection investments, while Sunset Park has received none (City of New York 2016b). 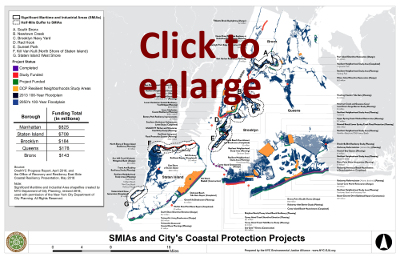 Community engagement in resiliency planning in the South Bronx

Hunts Points Lifelines, one of six winning proposals from US-HUD’s Rebuild by Design competition, was identified as a key OneNYC coastal-defense initiative. The plan was shaped and endorsed by the local community, businesses, and elected officials. In summer 2015, the City convened the Hunts Point Resiliency Advisory Working Group (AWG) to solicit feedback on neighborhood priorities for the implementation of the Lifelines proposal. Community stakeholders recommended that the project provide multiple benefits for both businesses and residents, and highlighted the need for sustainability, including utilizing ecologically sensitive materials for coastal protection and creating clean and renewable energy sources (Hunts Point Resiliency AWG 2015).

Furthermore, stakeholders saw the Hunts Point Resiliency project as an opportunity to implement not only equitable adaptation strategies, but also strong mitigation strategies that can reduce greenhouse-gas emissions. They viewed this as a chance to pilot a large-scale photovoltaic solar array with battery-storage technology to provide backup power in the event of extreme weather and potential blackouts. To further economic justice and equity, this solar installation could serve as a model for community co‑owned energy infrastructure.

The implementation of OneNYC initiatives have been top-down, often minimizing the concerns of community residents and stakeholders. For example, The City’s implementation of the Hunts Point Resiliency project has steered away from the original Hunts Point Lifelines proposal and subsequent community feedback, redefining the scope and extent of the interventions to be funded with federal resources. While the Advisory Working Group advocated coastal protection, the City ultimately disregarded these concerns by allocating nearly all of the earmarked funds to energy resiliency at the expense of coastal protection (New York City Economic Development Corporation 2015). The Hunts Point Resiliency project now consists of a resilient energy pilot—which is expected to predominantly target the vulnerability of the Hunts Point Food Distribution Center—and only a feasibility study for coastal protection and flood-risk reduction. Further undermining community priorities, in fall 2016, the City and the selected project consultant presented technology options that utilize hard infrastructure for flood-risk reduction and rely on fossil fuels as an energy source. This is a clear deviation from Hunts Point Lifeline’s intention to integrate ecology and sustainability into resiliency efforts. The Lifelines proposal had emphasized the importance of ecologically sound integrated flood protection, but the ecological component of the flood-risk reduction feasibility study is being minimized. This reflects a general pattern by which the implementation of OneNYC initiatives has been top-down, often minimizing the concerns of community residents and stakeholders.

Prior to the City’s launch of the Hunts Point Resiliency stakeholder engagement process, The Point CDC, NYC‑EJA, and other groups formed the South Bronx Community Resiliency Agenda (SBCRA). This initiative aims to increase resiliency, sustainability, environmental justice, and equity in the South Bronx SMIA through community-led planning. Project partners created a board of diverse stakeholders from the South Bronx to serve as a mechanism for sustained community engagement in support of implementing coordinated community-based plans for the South Bronx SMIA communities. The SBCRA has inventoried over 20 existing community development plans to identify and sharpen potential adaptation and mitigation strategies for Longwood, Mott Haven, Port Morris, and Soundview, in addition to Hunts Point. In 2017, both SBCRA and the AWG continue to press the City to pursue integrated flood-protection strategies that include green infrastructure and soft infrastructure, as well as a continuous greenway network for the waterfront. OneNYC should more fully integrate grassroots bottom-up planning, such as that being done by the SBCRA, into the City’s sustainability and resiliency planning framework. 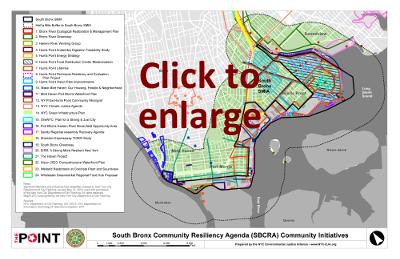 Recommendations for other cities

A growing number of cities in the United States are interested in promoting equity and justice within their sustainability and resiliency plans. These efforts need to transcend rhetorical aspirations and result in both procedural and structural transformations that equitably distribute resiliency resources. First, all investments must prioritize the most climate-vulnerable communities. Environmental-justice communities, whose residents have been subject to disproportionate environmental burdens, are more vulnerable to climate-change impacts. The framework for allocating funds must take into consideration both historic patterns of inequitable investment and analysis of social and environmental factors that continue to create climate-vulnerable populations (Bautista et al. 2016). Second, public participation and community engagement must be meaningful throughout the planning process. Communities must be able to influence decision-making—their engagement is worthless if community concerns are ultimately disregarded. Third, and most importantly, we must implement a paradigm shift away from traditional top-down planning, toward grassroots, bottom-up, community-based planning (Bautista et al. 2016). Sustainability and resiliency plans that fail to include grassroots voices at the table will perpetuate patterns of inequity. As a favorite refrain from the environmental-justice movement goes: if you’re not at the table, you’re on the menu. 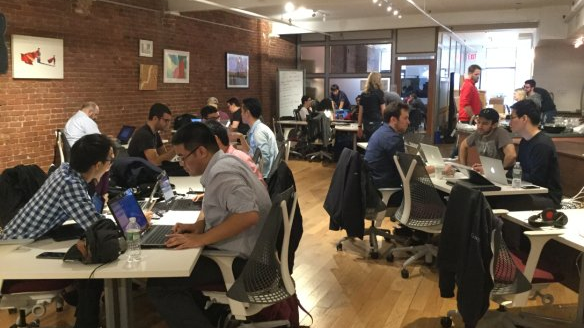 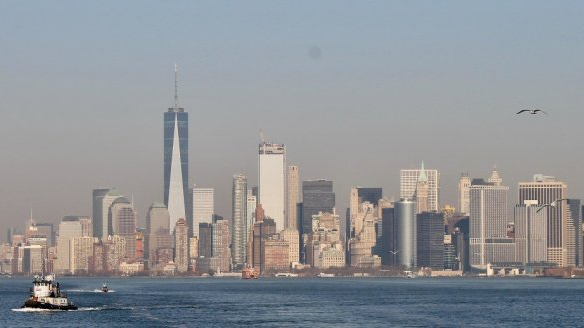