Nature in the City

Lise Bourdeau-Lepage & translated by Oliver Waine - 3 November 2014
Lire en français
While nature and the city have historically been opposing concepts, attitudes today are different: we now actively seek new ways to reconcile and combine the two in a harmonious coexistence. This series of articles asks how different forms of nature can be integrated into urban development, questions the sometimes contradictory desires revealed by this phenomenon, and examines the environmental, economic and aesthetic challenges that it raises.

“Wild” nature, which can be defined as all those elements (vegetable and animal) that pre-dated and have not been transformed by humankind, was a hostile space that had to be tamed. It never “appeared as beautiful as when the machine made its intrusion into the landscape” (Baridon 1998). In the collective human imagination, nature therefore symbolises freedom and beauty. At this moment in humankind’s history, it stands in stark opposition not only to industrialisation and urbanisation (Stallybrass and White 1986) but also to the city itself, which appears more than ever as the imprint of humanity’s power and its capacity to transform its environment. The idea of nature that began to develop at the time was defined not so much in its own terms as in opposition to the city, built by humans as the ultimate place of exchanges: exchanges of goods, of services, of knowledge, of ideas, of tastes, of emotions, and of mores and manners (Elias 1991); but also a place of congestion, of pollution, and of social tensions. It would become an essential factor in the well-being of city-dwellers. Elevated to this new-found status, nature would, in the 19th century, make its grand entrance into towns and cities in the form of publicly accessible green spaces. However, the form of nature in question was not “wild nature” but rather a “domesticated nature”, tamed by humanity, transformed and in certain cases magnified. While these open spaces were the result of a “hygienist” vision of the city, the public parks and gardens of Baron Haussmann’s Paris also went some way, for example, to meeting the demand for nature expressed by the new residents of large cities of the time, who had abandoned, or still had memories of, fields and countryside.

A park in the heart of Manhattan, New York City (November 2007)

Today, at a time when urban areas are home to the majority of the world’s population and environmental concerns are growing, humanity seems to be aspiring to a new form of proximity with nature. Our need for nature is currently expressed with greater intensity than in any previous period in history, and cottages and cabins – past symbols of humans’ desire for nature – have been replaced by dreams of a detached house with a garden. In doing so, Western humankind has become homo qualitus, that is to say a species of human that not only seeks material and immaterial well-being but also makes satisfying its desire for nature and preserving its living environment a key element of its well-being. Indeed, this is borne out by a survey conducted among 150 people in Lyon in spring 2012, in which 95% of respondents considered that the time they spent in public parks and gardens was important and/or essential for their well-being (Bourdeau‑Lepage et al. 2012). Those respondents from households that had chosen to settle in areas on the outskirts of cities indicated that the increase in their level of well-being depended on their contact with nature.

The “greening” of society

We are witnessing a “greening” of our society. This is reflected in the number of associations being created in urban areas that focus on raising awareness of environmental issues or protecting certain species of wildlife, as well as in the attitudes of urbanites themselves. In 2008, 72% and 75% of French people, respectively, declared that they often made use of the green spaces in their municipality and that the presence of such spaces was a factor in their residential choices. Furthermore, one in every two French citizens said that they would be in favour of laws that made it compulsory to include a minimum percentage of green spaces in all new housing and business developments, while two in three of the population felt that public spending on parks and gardens was too low (UNEP–IPSOS 2008).

City-dwellers flock to green, environmentally friendly cities, as shown by the latest international and national rankings of cities around the world, such as the Palmarès des villes vertes françaises (“League table of green French cities”) produced by weekly magazine L’Express, which ranks France’s 56 urban areas with more than 100,000 inhabitants on the basis of 24 indicators reflecting the state of the natural environment, the natural and industrial risks present (flooding, nuclear power stations, etc.), air quality, and factors such as public transport, cycle-path provision and other environmental amenities.

While it is true that humans are constantly looking to achieve ever higher levels of well-being, the ways in which they satisfy their desire for nature takes different forms for different people. Variations exist between men and women, between young people and older people, and between different social and occupational categories – for example, regular visits to green spaces are more important for women than for men, while older people prefer neighbourhood green spaces to large parks.

Satisfying our desire for nature today

Accordingly, city-dwellers, particularly in the West, satisfy these needs for different kinds of nature both spatially and temporally. They move to the outskirts of cities to live in houses surrounded by a small plot of land, and often go into the country at weekends or during the holidays. The result is urban sprawl and “compensatory mobility”, the effects of which on the environment are the subject of heated discussions between those who live in dense city centres and those who inhabit the boundless suburbs. 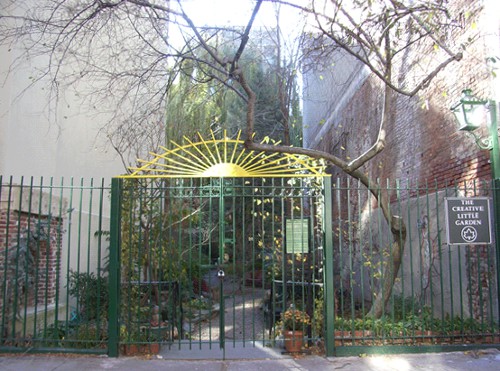 But the satisfaction of this desire for nature also takes on a very different form. At the very heart of our cities, urbanites crave a little bit of nature. This is reflected in the renewed popularity of parks and gardens, the creation of “shared” and community gardens, the rise of urban agriculture, the redevelopment of riverbanks, the growing numbers of beehives in the city (producing urban honey), the construction of green walls, the planting of flowers under the flagstones of city footpaths and on balconies, the development of eco-neighbourhoods, and so forth. It expresses a yearning for a new way of bringing together nature and the city. In terms of public policy, this has resulted in a willingness to reintegrate cities into their natural environments, the creation of new technical standards (making it possible, for instance, to create gardens on the roofs and terraces of apartment buildings in New York) and more generally taking the landscape into consideration in new developments, while the establishment of networks of “green and blue corridors” (for improved management of land and waterways/wetlands, respectively) calls for new ways of thinking about urban development and a new form of poetry for the urban environment. This, in turn, calls for new professions.

What form(s) of nature are found in the city?

The task at hand is a difficult one, as it involves reconciling two of humanity’s desires – the desire for urbanity, born of humankind’s desire to be with other humans [1], and the desire for nature – which theoretically are irreconcilable (Cantillon 1755; Mumford 1964). A second factor makes this course of action even more delicate, namely the very complexity of the idea of nature. More particularly, it is very difficult to grasp exactly what city-dwellers mean by “nature”, and therefore to precisely define their desires in this regard. Nature is often seen as a whole, as a concrete reality, and as something unique for different people (according to respondents, and even interviewers). The concept then becomes somewhat simplistic: it becomes a question of understanding – for example, by reconsidering John Dixon Hunt’s typology (1996) – exactly what kind of nature city-dwellers want, ranging from a wild, virgin nature; to Cicero’s alteram naturam, exploited by humanity to satisfy its needs, i.e. the countryside; to a nature improved by art, Jacopo Bonfadio’s terza natura, or “third nature”. By “nature”, urbanites often mean nature that has been domesticated and transformed, perhaps because it is essentially the only kind they know. And yet when asked about the possibility of making room for non-domesticated nature in green spaces – i.e. nature that is left to its own devices in order to encourage biodiversity, such as grasslands – the same city-dwellers respond favourably. At the same time, though, they also want accessible, well-maintained lawns (Bourdeau‑Lepage et al. 2012). It then becomes a matter of deciphering urbanites’ demand for nature, and capturing all the nuances of this demand, in order to move towards urban developments that meets the needs of the greatest number.

A garden in a public space in Beijing (spring 2012) 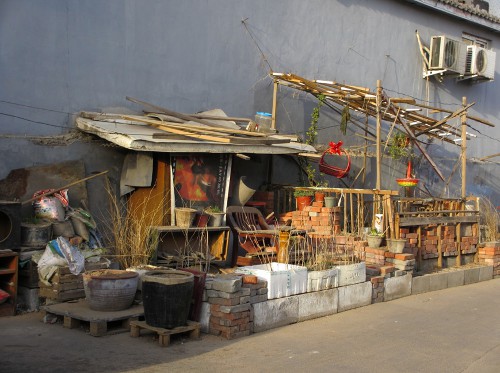 Combining nature and the city

Through this series of articles, Metropolitics hopes to participate in the debate that has emerged in recent years concerning the role of nature in the city, and of vegetation in particular: what forms can nature take in our cities? What is the role of urban agriculture? How can our desire for urbanity be reconciled with our desire for nature? What does this involve in terms of public development, governance and the training of planners? What are the roles played by landscapes and public spaces in these processes? The challenge here is to gain a better understanding of the ways in which cities can be planned and developed by more effectively taking urbanites’ desire for nature into consideration and by bringing nature, walking for pleasure and aesthetics to the fore without generating new socio-spatial inequalities.

Articles in this series:

See also on Métropolitiques (in French):

[1] The city is born of the gregarious instinct, which pushes humans to group together in order to act together and thus take advantage of the synergies created in this way (Bairoch 1985). Consequently, it is the spatial expression of the satisfaction of one of humanity’s fundamental needs, namely to live together in communities in order to interact with – and sometimes protect themselves from – their neighbours (Duby 1993).