Élise Geisler & translated by Oliver Waine - 8 January 2014
Lire en français
Research on the subject of the landscape reminds us that it does not just engage us visually, but that all our senses are involved. In particular, Élise Geisler here revisits the concept of the “soundscape”, based on the work of Raymond Murray Schafer, who invented the term in the 1970s.
landscape / soundscape / acoustic environment / urban ambiences
Download PDF

In this paper, we shall seek to reconsider the notion of the “soundscape”, a neologism coined in the 1970s by Raymond Murray Schafer, a Canadian composer and educator (Schafer 1979). His pioneering work remains a reference for all disciplines interested in the acoustic environment. The concept as he developed it can today be revisited in the light of recent developments in theories on landscapes (Berque 1990, 1996; Corbin 2001; Luginbühl 2007; Donadieu and Périgord 2007; Bergé and Collot, 2008; Besse 2009, 2010). This notion was shunned in France among academics [1] and practitioners alike, in favour of other terms such as “acoustic environment” or “ambience”. In fact, the term causes as much debate as the word “landscape”, which has been deemed too vague and subjective by some geographers since the 1960s (Filleron 1998). Given soundscape’s close etymological links to this latter term, it too therefore becomes highly polysemic and finds itself associated with the historical definition of “landscape”, where the subject is detached from the object and views it from a vantage point. It is partly for this reason that the concept of the soundscape is still little used in France, particularly in the field of spatial planning. However, the time now appears to be ripe to reconsider this notion in the light of developments in landscape theory over the last 40 years, and in particular developments resulting from landscape-related public policy. Such policies appear to have brought the concept of the landscape closer towards an acceptance of a social construction that may enhance understanding of the relationships between people and their environment, both in the academic world and in general (Geisler 2011).

According to Schafer, the term “soundscape”, derived from “landscape”, designates those elements that shape or compose a landscape from an acoustic perspective, not just aesthetically but also historically, geographically and culturally. The composer formalised this concept in his 1979 work The Tuning of the World. [2] In his view, just as vision can reveal a place, so our sense of hearing can perceive a place as a composed, landscaped unit.

Schafer’s definition has given rise to many reflections and discussions on the subject, which, by analogy to the classical definition of the landscape, apply as much to a geographical space with specific, analysable acoustic characteristics as to abstract representations and constructions such as musical compositions. Indeed, the soundscape has a number of dimensions: it is aesthetic when it is an object that is listened to, and it is a part of the physical environment when – in a foreshadowing of soundscape design – it fits into what Schafer considers to be the field devoted to the study of soundscapes: acoustic ecology. He defines this as “the study of the effects of the acoustic environment or soundscape on the physical responses or behavioural characteristics of creatures living within it” (Schafer 1979). But, according to the English geographer Paul Rodaway (1994), the soundscape has gradually moved away from a system consisting of a territory, an individual or group of individuals and the relationships that develop between the two. Here, if we incorporate a third element, namely time, what he was essentially referring to was a way of representing the acoustic world, just as a composite view or a scene is a way of representing the visual landscape; it is this that generated such reluctance in France to use the term in its French translation, paysage sonore. [3]

Although the notion of the soundscape has led to a great deal of research on the acoustic environment and the way it is designed and developed, this concept has also been widely questioned, and sometimes strongly criticised. Some have criticised its entrenchment in a traditional vision of the landscape, marked by naturalism, and in an aesthetic approach to the acoustic world (Lopez 1997).

In order to understand Schafer’s approach, we must situate the creation of the idea of soundscape in the context of the environmentalist movement that began in the late 1960s in North America and Northern Europe, which brought the concepts of landscape and nature together. It was at this time in France that policies to protect outstanding natural landscapes began to be developed. The soundscape, according to Schafer, is a critique of the modern world whereby the sounds of post-industrial civilisation are almost always considered to be negative. Soundscape theory, like landscape theory, has a confused relationship with the notion of nature, as it suggests that the reality is a product of nature. Thus, Schafer maintains, nature is to be understood as an immense “musical composition” that we should be able to harmonise by valuing natural sounds. The naturalist approach, in a somewhat simplistic way, is built around the “landscape-object”, which must be described and analysed objectively. It emphasises the physical and, above all, spatial aspects of the landscape: what is studied here, therefore, is the phenomenon of the physical production of a territory by human societies, and the result thereof, not its representation. This vision, generally defended by the earth sciences and planning-related disciplines, finds its climax in the definition of the landscape in the field of ecology, where it is considered an “objectifiable ecosystem” whose subject is excluded. Schafer, through his acoustic ecology approach, somehow paradoxically reproduces the very attitudes of the acoustical engineers that he criticised, who favour naturalising acoustic phenomena and relieving the subject of his or her responsibility to listen, [4] by creating a passive subject who suffers the surrounding acoustic environment (Chion 1993).

Soundscape: beyond an aestheticisation of the acoustic world

This naturalist bias in Schafer’s work is complemented by an aesthetic approach, which distinguishes between “hi-fi” soundscapes, that is to say of high quality (those of idealised nature, which exhibit cyclic and original sonorities), and “lo-fi” soundscapes (those of the industrial city, characterised by repetitive and monotonous sonorities). In a natural context, Schafer asserts, the relationship between sound signals (in the foreground) and background noise – the signal-to-noise ratio – is such that each sound can be distinctly heard, which is not the case in the city. This approach implies that only remarkable natural landscapes may be appreciated. In the scientific literature, from the Renaissance onwards, the term “landscape” has above all meant “remarkable landscape”. This elitist notion highlights not just that the experience of the landscape was reserved for devotees, but also that only a few rare sites were considered capable of eliciting landscape-related emotion. However, in recent years, the emphasis has been less on the “remarkableness” of landscapes and more on its everyday characteristics as a living environment (Davodeau 2005). This is reflected in the definition of “landscape” in the European Landscape Convention of 2000, where it is described as “an area, as perceived by people, whose character is the result of the action and interaction of natural and/or human factors”, and is also reflected in changes in public policy pertaining to the landscape. Indeed, while the initial aim of such policies was to preserve historical monuments and exceptional sites and to protect nature (also exceptional), their focus now tends towards improving the living environment. In addition, the “urban landscape” has become the subject of all sorts of research and projects, and an increasingly accepted concept in general. Consequently, the landscape is regarded rather as a relationship between people and their physical environment, which may be natural or industrial, urban or rural, coveted or abandoned, as underlined by the European Landscape Convention.

Readers may also be surprised to learn that Schafer’s soundscape was constructed in the same way as the visual landscape, based on the principles of Gestalt theory, introducing concepts such as background noise (as the ground) and sound signals (as the figure) – here, we have a construction that is very much related to pictorial and architectural traditions, ideas of perspectives and composed scenes, in which the subject is detached from the object, which is viewed from a vantage point. However, the aesthetic dimension of the landscape also calls for aisthesis – i.e. people’s experiences and practices – and values of appropriation and ownership on a more familiar scale. Accordingly, the “ordinary landscape” (Luginbühl 2007) places the emphasis on a relationship that is “built on everyday-ness” characterised by greater proximity and greater subjectivity (Bigando 2006).

Soundscape: a concept, a tool and an object of spatial development

Despite the criticisms that can be levelled at Schafer’s neologism, or more specifically at the attitude it implies vis-à-vis the acoustic environment, this concept has nevertheless generated a great deal of research since, creating a point of convergence and discussion between different disciplines (musicology, acoustics, psychology, sociology, geography, architecture, etc.).

The landscape as a natural panorama contemplated from a distance, while still present in expressions of ideology and marketing (Besse 2010), is now being challenged both in terms of perceptions and representations and in terms of realities and projects (Berque 1990, 1996; Corbin 2001; Luginbühl 2007). Today, the landscape is considered not just from an aesthetic standpoint (in terms of beauty), but also from ecological, socio-economic and environmental standpoints. The landscape now enjoys a status as a concept that is representative of society’s sensitive interactions with the surrounding living environment; it is no longer simply a vehicle or a visual backdrop. Similarly, the soundscape can no longer be considered purely for its remarkable aspects that need to be protected or its musical essence, but instead must be recognised for its social and anthropological dimensions. In addition, its reformulation in the light of recent developments in general landscape theories means it is better placed to highlight the sensitive relationships that people build up with their everyday acoustic environment, which they make into a concept, a tool and a design and planning object that goes far beyond simply combating noise pollution. The next step is to devise the methods and tools necessary to move from theory to action, and make practical use of the soundscapes that surround us (Geisler 2011).

[2] The concept is not new, however: it was the subject of research conducted by the Finnish geographer Johannes Gabriel Granö in the 1930s, and by the American urban designer Michael Southworth in the 1960s.

[3] The concept of the soundscape (paysage sonore in French) was above all associated, in the 1980s and 1990s, with recorded sound sequences, in particular phonographies and electro-acoustic pieces. At this time, in the field of planning and development in France, the term environnement sonore (“acoustic environment”) was preferred instead. It is nonetheless interesting to note that equivalent concepts are used with fewer reservations in English-speaking countries (where “soundscape” prevails) and in Germany (where the equivalent term is Klanglandschaft) among academics, artists and practitioners alike.

[4] A contradiction appears, in fact, between this naturalisation of sounds that eliminates the listening subject and the asserted desire of acoustic ecology, as defined by Schafer, to focus on the relationship between the subject and its acoustic environment, rather than the sounds themselves. 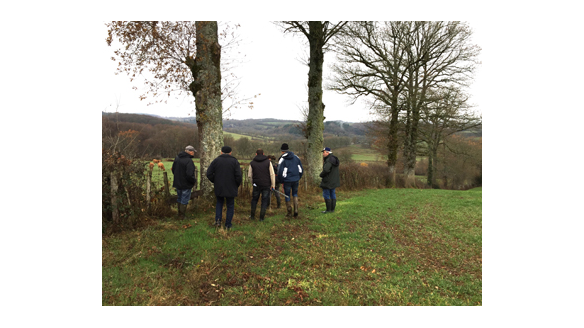 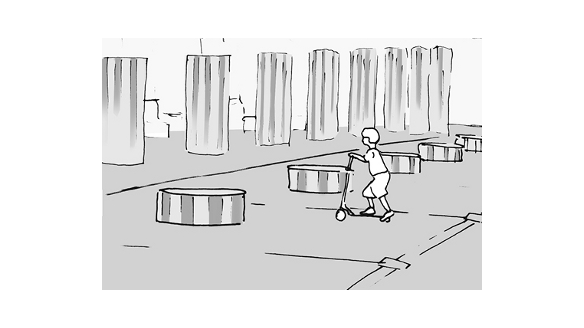 Sonia Curnier & translated by Oliver Waine - 20 March 2015
With the rise of the “ludic city”, the work of Roger Caillois and Marc Breviglieri allows us to question the... 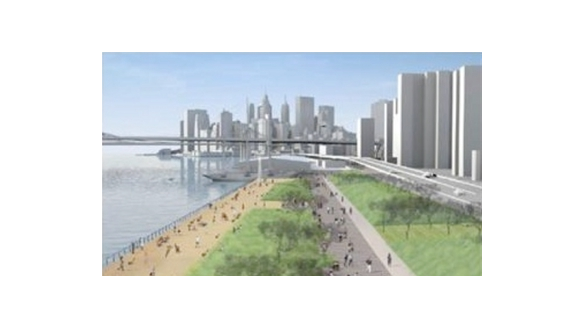 The poetry of the urban landscape

Émeline Bailly & translated by Oliver Waine - 9 October 2013
The ideal of “nature in the city” is a key characteristic of many urban projects. Émeline Bailly shows that the...