From non-planning to cutting-edge policy: the transformation of waste management in Boston since the 1980s

In 2018, the city of Boston banned plastic bags and launched a zero-waste initiative. In doing so, Boston joined a growing list of cities using solid-waste management to advance sustainability and climate goals by closing material loops and reducing consumption. Despite recent setbacks in the global recycling market, these incipient initiatives are significant. The recent history of waste management in Boston highlights just how radical and potentially transformative these new approaches are.

Waste management was established as a municipal responsibility as part of the Sanitary City movement in the late 19th century. Industrial cities, relying on the expertise of the first generation of sanitary engineers, devised strategies to collect and dispose of household wastes (Melosi 2008, 2005). Materials that people had once repurposed, sold to micro-entrepreneurs, fed to neighborhood pigs, or simply lived with, all became redefined as waste (Strasser 1999). Early attempts at municipal-scale recycling were not economical; so, by the turn of the 20th century, Americans had become accustomed to throwing everything in a single bin and having it whisked away.

Though there were periodic recycling efforts—during the world wars, for instance—the municipal processes established during the Sanitary City era created physical and institutional infrastructures for disposing of wastes (like, for example, the discipline of sanitary engineering itself, municipal landfills and incinerators, fleets of garbage trucks, municipal sanitation departments), and a set of public expectations about cleanliness and convenience.

The basic Sanitary City logics of hygiene and efficiency were threatened in the 1950s, when disposable beverage bottles replaced refillables. The resulting litter scourge initially inspired policymakers to ban disposable containers. The profit potential in disposability, however, motivated manufacturing industries to organize against this policy tack. A coalition of beverage and bottle manufacturers established Keep America Beautiful (KAB), an “environmental” nonprofit that promoted litter prevention.

KAB crafted messaging that shifted responsibility for disposable products onto consumers (through anti-litter campaigns) and municipalities (through support for municipal recycling) (Dunaway 2015; Elmore 2012; MacBride 2012). KAB and its corporate funders were epically successful. To this day, public signage remonstrates citizens to put litter in its proper place, corporate campaigns urge consumers to recycle as a salve against environmental anxiety, and well-funded opposition materializes to any policy that challenges the established order (like bag bans and bottle bills, for instance).

The fundamental shift from corporate to individual and municipal responsibility was key in producing what I think of, following Zsuzsa Gille’s (2007) formulation of a waste regime, as a “weak-recycling waste regime” that now structures municipal waste management in the US. This regime, reinforced through the interaction of sanitary engineering, a consumption economy, and the corporate cooptation of waste-management policy, has structured municipal options for waste management since the 1960s. It ensures limited post-consumer recycling at public expense, distances consumption from wasting, and maintains the perception that individual recycling equates to environmental responsibility.

The case of waste management in Boston in the 1980s illustrates the regime in action. By 1980, Boston had no local waste-disposal capacity. City landfills were full and capped, and the last operating incinerator had been shuttered in 1975 owing to environmental violations. The entire Boston region was, in fact, facing a disposal crunch as federal environmental regulations forced old landfills to close. As capacity diminished, disposal costs crept upward, pressuring the municipal budget, and also affecting the commercial sector, which managed its wastes independently.

In the face of this crisis, local politicians saw only two possible solutions: build an incinerator to burn the city’s garbage, or continue to export it to regional facilities, whatever the cost. Neil Sullivan (2016), Mayor Ray Flynn’s (who served from 1984 to 1993) policy chief, recalled that:

This framing shows the effect of the waste regime: committed, progressive city officials—who believed in recycling in the abstract—understood their core responsibility as disposing of Boston’s garbage. The solution thus lay in identifying the right disposal option.

Boston’s public-works commissioner during this era was Joe Casazza, a long-time public servant. Commissioner Casazza was a member of KAB and had internalized weak-recycling waste-regime directives about cleanliness, efficiency, and municipal responsibility (Menzies 1983; Powers 1981). Casazza favored the incinerator option because he believed that a city-owned incinerator would allow Boston to keep streets clean at a reasonable cost (Fox 1983; Malone 1988). Under regime logic, waste-to-energy (WtE) is a perfect technological solution to a disposal shortage. It allows garbage to almost disappear [1]1 while capturing some of the latent energy in discarded materials. [2]2 WtE thus allows municipalities to fulfill their obligations for waste removal, while “energy recovery” provides environmental cover for increasing consumption. Casazza was not alone in viewing WtE as a viable option: acting within the same parameters, dozens of US cities also considered WtE projects during the early 1980s (Newsday 1989).

The planning that unfolded around WtE in Boston reinforced the disposal-focused view of public officials. The city never considered options beyond WtE or garbage export, even though waste-reduction options like bottle bills, recycling, and yard-waste composting were all surfacing and succeeding in other cities at the time (Seldman 2005). [3]3 The first major waste-planning document in Boston during this era was the Environmental Impact Report (EIR) commissioned by Casazza. The report only fully evaluates the WtE proposal, with brief consideration of four garbage-export options (CSI Resource Systems 1983). The EIR contained no public comment, no discussion of disposal alternatives. It did not even include an assessment of the material content of the city’s waste stream.

Figure 1. Artist’s impression of the proposed waste-to-electricity incinerator in Boston 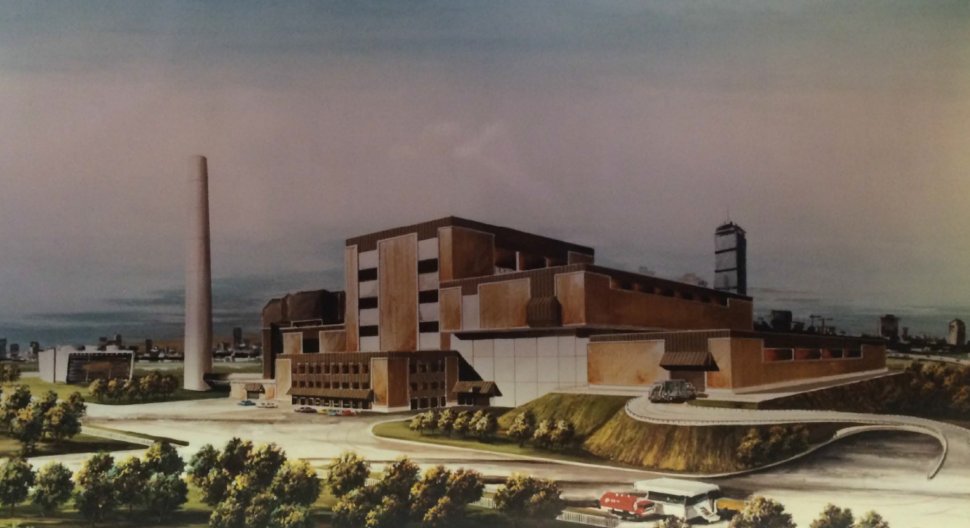 Mayor Flynn’s administration built on the narrow analysis of the EIR by appointing a Citizen Advisory Committee on Solid-Waste Disposal. The committee included public officials, neighborhood representatives, and business leaders. One neighborhood representative was affiliated with a public health organization, but no members had professional expertise in waste management or the environment (Citizen Advisory Committee on Solid-Waste Disposal 1985). The Flynn administration gave the committee a narrow mandate: comment on the WtE proposal and two export scenarios. Committee members were frustrated that they were prohibited from exploring other alternatives and worried about limited public participation in the planning process (Citizen Advisory Committee on Solid-Waste Disposal 1985; Malone 1987a, 1987b). City officials viewed the committee process as transparent, efficient and pragmatic. But its particular blind spots—a lack of expertise about the environment, specifically—reveal the fingerprints of the waste regime. Even the committee’s title, emphasizing disposal, rather than a more inclusive concept of waste management, demonstrates the limited view of city leaders.

The Flynn administration never considered these proposals. In alignment with the weak-recycling waste regime, Mayor Flynn continually isolated recycling as an ancillary issue, irrelevant to the city’s disposal decision. He told the Boston Globe that “as much as 85% of Boston’s trash ‘will not be recycled under any plan. Boston needs a solution for all of its trash. We cannot accept recycled concepts’” (Howe 1988). By limiting planning, and maintaining a narrow view, the administration allowed the regime to determine its options.

In the end, Casazza’s incinerator was never built. A series of other conflicts arose, including alternative priorities for the preferred incinerator site and political opposition from state officials. By default, the city was forced to continue the costly practice of exporting its garbage (Jordan 1988; BMRB 1986). When Mayor Flynn finally launched municipal recycling in 1990, it was more of an attempt to resurrect jobs at a closed paper mill than a waste-management strategy (Flynn 1990).

Since the 1980s, the urban context has changed. One salient difference is that lack of federal action on climate change has forced cities to engage environmental policy that reconsiders fundamental processes and relationships. Municipal waste-management reforms offer many environmental benefits, from reduced plastic pollution to reduced greenhouse-gas emissions. But they also—and perhaps more significantly—discursively and pragmatically connect production, consumption and waste, links that the weak-recycling waste regime, and the Sanitary City regime before it, has obscured for generations. The willingness of state actors to chart this territory should be examined carefully, perhaps even as a model for environmental progress in other sectors.

[1] Although anti-incinerator activists will point out that nothing actually disappears: incineration reduces waste volumes substantially but results in an ash substance, usually highly contaminated with toxins, that must still be landfilled, as well as dozens of highly toxic compounds in gas form (GAIA 2011).

[2] Again, anti-incineration activists typically dispute industry claims about energy capture since it is far less efficient and far more polluting than coal. (see: www.energyjustice.net/incineration/worsethancoal). WtE also tends to deprioritize recycling, since some value in the material is being captured anyway, and also discourages waste reduction, since once the facility is built it needs a stable volume of inputs to operate efficiently (GAIA 2011).

[3] For example: Seattle, Minneapolis (see: www.hennepin.us/-/media/hennepinus/residents/recycling/master-recyclers/mrc-manual-all-chapters.pdf?la=en), and even Woodbury, New Jersey, were implementing large-scale recycling programs (see: www.citylab.com/city-makers-connections/recycling) by the late 1980s (Seattle Public Utilities 2013). While these programs have to be understood as acceptable solutions within the weak-recycling waste regime, they created the institutional foundations for more substantial and radical waste reduction programs—like the material bans and zero-waste programs expanding recently.