James Orr & Ofronama Biu - 10 October 2017
Analysts have long noted difficulties in quantifying and projecting skill mismatches in local labor markets. Workforce development providers and community colleges have led the way in responding to this challenge, particularly when it comes to middle-skill jobs, or jobs that require more than a high-school diploma but less than a bachelor’s degree. In this article, James Orr and Ofronama Biu probe the methodologies local practitioners use to define middle-skill occupations and to understand the labor market dynamics that underlie the filling of this important type of job.
employment / work / methodology / metropolitan areas / education / training / university / workforce / middle-skill occupations / jobs / qualifications / community college / labor markets / United States
Download PDF

Community colleges and workforce development providers face the ongoing challenge of aligning their training efforts with the kinds of skills [1] that employers demand. [2] In theory, if workforce providers can get the training mix right, local areas can avoid an abundance of unfilled job opportunities or a supply of too many eligible jobseekers for too few jobs. Several analysts have noted difficulties in quantifying mismatches in local labor markets (Froeschle 2010; Modestino 2015; Şahin et al. 2014). Occupational demand projections require assumptions about future local economic conditions and technological developments. Supply projections require information on the extent to which workers will enroll in relevant training programs or migrate to take advantage of job opportunities. A number of localities have found ways to identify potential mismatches and use this information to develop or further fund education programs.

Why focus on middle-skill occupations?

Middle-skill jobs, or jobs requiring more than a high-school diploma but less than a bachelor’s degree, are critical because they usually offer better pay and chances for advancement than low-wage occupations requiring less education. Community colleges and other workforce providers typically create training opportunities that target these occupations.

Many researchers have documented the decline in middle-skill jobs in the last few decades and have highlighted a variety of possible causes, including automation and outsourcing (Autor et al. 2003; Abel and Deitz 2012; Cheremukhin 2014). Others (Holzer 2015) have pointed to the rise in newer middle-skill jobs, or those occupations in industries such as healthcare, construction, and high-end services that require more technical skills. Moreover, employers often cite a “skills gap”—they say they cannot find enough qualified individuals for their open positions (Cappelli 2014). At the same time, employers have offered less training in recent years and increasingly look to the education and workforce system to provide skilled workers (Cappelli 2014). Policymakers and training providers are thus particularly concerned about ensuring that the number of eligible workers matches demand for existing and emerging middle-skill occupations.

There are many ways to determine how much education any given job requires. One is to use the minimum required education level assigned by the Bureau of Labor Statistics (BLS) or some other state or local government agency; another is to use the American Community Survey (ACS) to analyze the educational attainment of those employed in a particular occupation in a given region. Table 1 summarizes the definitions used in the supply–demand studies reviewed here. 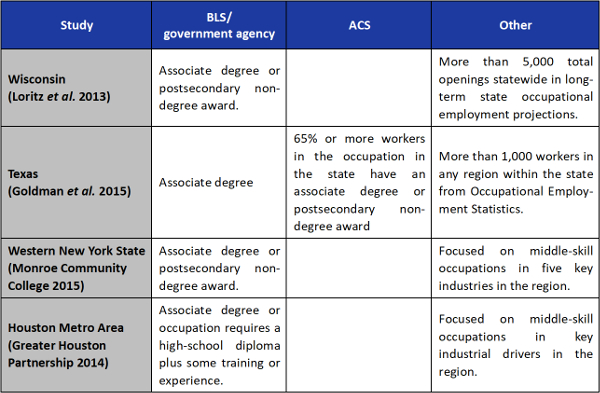 Organizations looking for information on middle-skill occupation demand typically rely on real-time online job postings data and BLS biannual 10-year long-term job-openings projections. Researchers use online subscription-based software—such as Burning Glass Technologies™ or Help Wanted OnLine®— to obtain the number of online jobs posted in a certain area over a particular time frame. The data also includes information about the education, certification, and skill requirements of each position. The two studies that used job-posting data blended them with other information. The Western New York report relied on these data to capture the skill sets needed in each of the groups of critical occupations. The Texas report indicated these data were one particularly useful source of current demand in linking occupations with postsecondary education offerings.

BLS job-openings projections are available for middle-skill occupations in states, metropolitan areas, and a selected number of cities. Projections for other sub-state areas must be obtained from state employment-security agencies. All but the Wisconsin study reported that these long-term projections contributed to the preparation of their demand projections. Table 2 summarizes the sources of demand projections used in each of the studies. 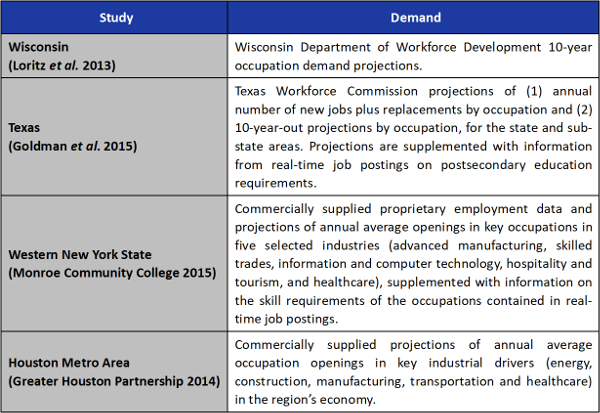 Caveats apply to both of these widely used sources of occupation demand. Real-time job ads may reflect attempts by staffing agencies or employers to collect resumes and get a sense of the workforce rather than actual demand. Demand could also be underestimated from this source because larger employers are more likely to advertise online than small employers. Employers also post high-wage jobs more frequently than low-wage jobs (Maher & Maher et al. 2014). BLS long-term projections can also be biased if assumptions about technological developments and how they affect demand are incorrect. Finally, to date, BLS annual average opening estimates included only new jobs and those opened by individuals who have retired or left employment in that field. Beginning in 2017, BLS will also include openings due to churn, or turnover.

Projections of how many workers are available to take jobs in middle-skill occupations are typically based on how many people have recently completed appropriate education and training programs in institutions located within the geographic scope of the labor market (Table 3). They draw on records reported directly by postsecondary institutions in the state or from information on degrees and certificates available in the Integrated Postsecondary Education Data System (IPEDS). [3] To the extent that these degrees and certificates can be mapped to middle-skill occupations, these counts yield a quantitative estimate of the supply of workers.

Most local area studies reviewed here focus on opportunities for workers living within the particular jurisdictions for which workforce development providers are responsible. The Western New York State study computed their supply measures from the number of program completers at community colleges within the 10-county region. The Houston area supply study used IPEDS data to project the number of graduates with appropriate credentials from institutions located in the greater metropolitan area.

Basing supply estimates on the number of graduates from local training institutions could overstate the available supply as trained workers have the option of migrating to other areas where their skills are in demand. While high-skilled workers are considered highly mobile, there is still a risk of out‑migration of young, newly trained middle-skill workers. Moreover, local employers facing an increase in demand can fill openings not just with locally trained workers but also qualified workers who are currently employed, unemployed, or out of the labor force, or from the interregional migration of trained workers. Studies reviewed in Bartik (1993) suggest that between a third and half of new jobs in local areas are filled by migrants.

Three of the studies noted the potential for interregional migration to affect local labor supply. The Wisconsin study reduced the annual flows of program completers from state institutions by 33%, the historical average state out‑migration rate of students from Wisconsin educational institutions. That study also adjusted the flows to account for the labor-force participation rates of graduates. The Houston area study noted the potential for out‑migration to reduce the supply of trained workers and made a case for training workers in excess of projected demand.

The study of middle-skill occupations in Texas projected the supply of workers by extrapolating the growth in the number of workers in the occupations concerned over the previous 10 years. It took this growth rate from the detailed occupational employment data available from the ACS. The model assumes growth is some combination of program completers in institutions in Texas, in‑migration of qualified workers, trained unemployed workers and those out of the labor force. The Texas study’s authors (Goldman et al. 2015) note that it is difficult to model these individual sources of supply and that projections are not precise.

These studies offer several options for characterizing worker shortages or surpluses (Table 4). Using the strict numerical difference, as in the Western New York State study, between projected supply and demand, can be appropriate in some cases. Goldman et al. (2015) developed an alternative approach by comparing demand and supply growth rates in Texas, grouping demand for and supply of occupations on a spectrum from low to high growth. Occupations with relatively fast projected demand growth and relatively slow projected supply growth were considered occupations facing shortages, and those with slow demand but fast supply growth faced surpluses.

The Houston area’s staffing environment indicator offers a broader characterization of potential occupation imbalance by computing an index from recent changes in the occupation’s relative wage and its projected demand growth rate, share of employment in the local area, and recent change in the share of overall employment in the local area. It then arrayed occupations on a spectrum from easy- to hard-to fill, and the index focused policymakers’ attention on the latter.

Overall, the studies did not find evidence of widespread middle-skill job mismatches. The Western New York study revealed middle-skill shortages in several specific occupations in each of the five industries, however, including a large projected shortage of nurses, home health aides, and personal care aides. The study noted a somewhat sizeable projected surplus of dental hygienists. The Wisconsin and Houston studies did not find significant imbalances in the supply of program completers in middle-skill occupations, though there was some concern with potential mismatches in several healthcare occupations in Houston. In the Texas study, there were not a sizeable number of occupations in the high-demand/low-supply or low-demand/high-supply categories, though there was a projected shortage of air-transport workers and a surplus of law-enforcement and selected production workers. The study did project slight shortages in several occupations, including sales representatives and supervisors, office and administrative support workers, computer specialists, financial specialists, teachers, and health technologists and technicians. 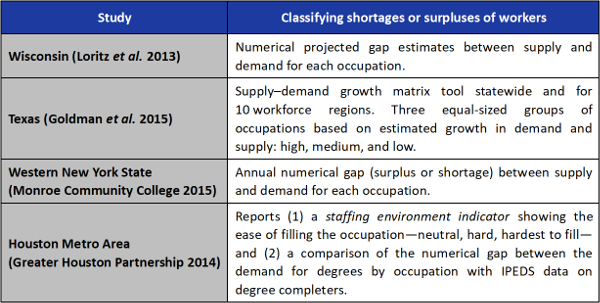 Local area middle-skill occupational research helps policymakers and training providers understand how the supply of the workforce matches employers’ demands. Overall, these studies did not find broad middle-skill occupational imbalances, though they did find evidence of potential imbalances in specific jobs. As Cleary and Van Noy (2014) point out, however, efforts to align workforce training with the needs of employers is presently more of an art than a science. On the demand side, the main sources are real-time online job postings and 10-year demand projections. The most widely used measure of supply was the number of training and certificate program completers. All of these sources clearly have shortcomings. The researchers also did not factor in other sources of supply, such as trained unemployed workers or potential in‑migrants; data constraints likely explain this omission.

Policymakers and workforce development providers undertaking similar studies should consider ways to obtain data on these additional sources of supply. Moreover, centralizing local sources of information on both skill supply and demand could increase the accuracy and transparency of projections, support the efficient use of limited workforce resources, and help localities avoid over- or under-producing workers to meet projected demand.

[1] For purposes of this paper and others reviewed, we use the term “skill” in the same way as “educational attainment.”

[3] IPEDS is a system of annual surveys conducted by the National Center for Education Statistics that collect data on enrollments and completions, among other information, at US postsecondary educational institutions. See: https://nces.ed.gov/ipeds/Home/UseTheData.