The Future of Asbury Park: Gentrification and Youth in a Coastal Community

Alicia Raia-Hawrylak - 31 March 2015
Once known as a successful beach community, with a lively boardwalk and thriving rock music scene, the city of Asbury Park, New Jersey, faced steep decline as investment shifted to the suburbs and other places of amusement. With gentrification occurring since the early 2000s, Alicia Raia-Hawrylak documents the experience of an oft-neglected group in both academic research and urban politics, the city’s youth, and considers their inclusion in future urban planning.
gentrification / children / teenagers / tourism / youth / community / United States
Download PDF

Asbury Park, New Jersey is a small beach community experiencing a surge in redevelopment that began over a decade ago after years of disinvestment. The city, founded in the 1870s as a religious retreat for tourists from New York City, attracted visitors to its beaches, shopping facilities, amusements, and music venues famous for launching the careers of artists including Bruce Springsteen. In the 1960s, suburbanization led to white flight and disinvestment. Around the same time, newly built shopping malls competed with downtown businesses, and highway development led to competition for tourism with several newly accessible resorts (Bilby & Ziegler 2009). The situation worsened existing inequalities, particularly in employment, and fostered racial tensions. Subsequent civil unrest and rioting in 1970 exacerbated property loss and led to a significant decline in the tourism industry (Wolff 2005). Several state-led redevelopment plans in the 1980s failed (Reidy 2012), but redevelopment efforts led by members of the incoming gay and lesbian community in the early 2000s initially positioned the city as a destination for gay tourism. The city is part of the state-led Community Development Initiative (Reidy 2012), and local groups such as Interfaith Neighbors, a collaboration of local religious organizations, have contributed to efforts to rebuild. A number of private development firms have also facilitated major development of the waterfront area on the city’s east-side business district. This redevelopment recently has included family-friendly amenities such as a water park, mini-golf, and a pinball museum, along with a number of music venues, bars, nightclubs, and upscale restaurants. 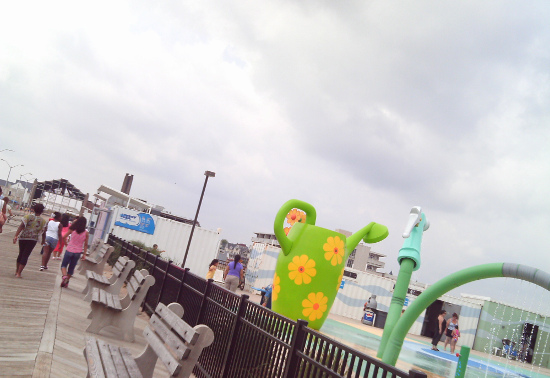 Asbury Splash Park is a privately developed water park adjoining the boardwalk’s tourist attractions on the east side; the cost of daily admission is $9 for children and $5 for adults. © Alicia Raia‑Hawrylak.

Investments in the city have primarily focused on tourism-related amenities near the ocean and an influx of luxury housing. The focus on the wealthy typical of the process of gentrification neglects over a third of the city’s residents who currently live in poverty. Furthermore, the focus on consumption ignores the needs of resident youth, who require safe and free public spaces for recreation in the adjacent areas that are as yet untouched by gentrification. While most studies of gentrification focus on displaced residents and a limited number examine the conditions of adults who stay, there are very few studies on the experiences of youth in redeveloping communities (Kinloch 2010; McCoy & Vincent 2007). When given the opportunity to articulate their experiences, youth in Asbury Park described the unexpected outcome of feeling less safe as particular spaces became “better” or more developed. 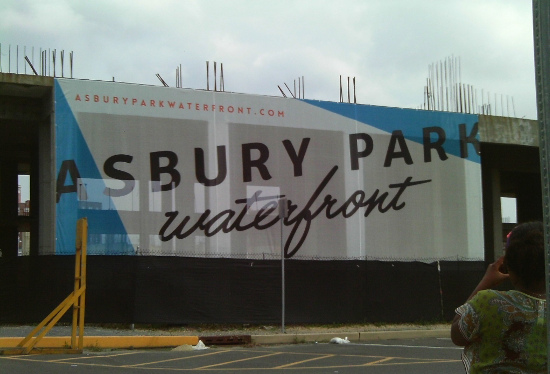 A local 4th grade student takes a photograph to document the construction on Asbury Park’s waterfront. This photograph was taken by another student.

From their own accounts, youth in a gentrifying community whose families are not displaced grow up with an awareness of the forecasted changes as they unfold around them. During my time working as a teacher in Asbury Park, my students were often eager to vocalize their unique point of view in this process, giving a grounded perspective on how children experience and understand gentrification.

Figure 3. Water park on the west side of Asbury Park 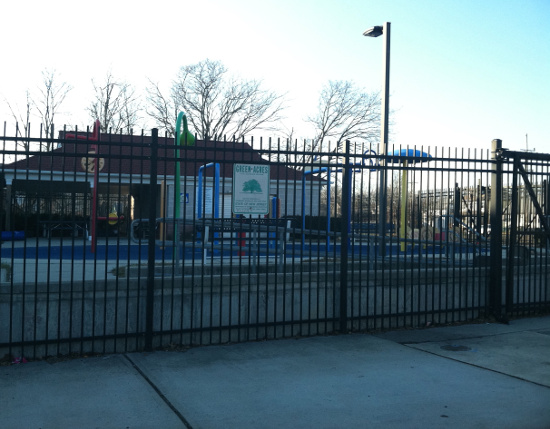 The water park in the city’s west side is open to the public; it is located on a street where several respondents recounted hearing at least one gunshot. © Alicia Raia‑Hawrylak.

The city of Asbury Park is a little over a square mile in area, and the rapid redevelopment on the east side is within view of children living in the disinvested west side of the city (and particularly the southwest quadrant). I conducted interviews with young people aged 11 to 16 and their guardians in the city during the summer of 2012, which included a mapping exercise and photo elicitation of city landmarks. Many of the youth I interviewed were former students, and our level of familiarity enabled a thoughtful dialogue on their perceptions of the changes around them. The descriptions of youth and their parents indicated that invested spaces seem to get safer, and particular areas may experience a drop in crime during or after the process of gentrification. Yet they report that these changes make neighboring disinvested areas appear comparatively worse over time, and more dangerous (Raia-Hawrylak 2014). For example, a 14-year-old west-side resident named Kenny described his perceptions of the east side of the city, near the ocean, where investment is taking place:

Across the tracks is the better place where the beach is at… that’s what they really rebuilding, all the stores and stuff. There’s not a lot of gang violence over there neither. It’s more strict. They have kind of different rules and more cops, cops walking on the beach, cops walking on the ground, cops on bikes, cops on cars.

“They’ve been cleaning up, better roads, more plants, the sidewalk and stuff,” Gerald, a 16-year-old, observed about the east side. Mariah, a 13-year-old west-side resident, said she did not like her neighborhood. When asked how to improve it, she said, “Make more parks, clean up around, recycle, build more houses, fix the streetlights and stuff.” Diamond, an 11-year-old whose classmate was shot but survived the previous year, began her interview with the following description of the city: “A dangerous city. Shooting. Stay out of the dangerous areas. Washington Avenue. By the beach it’s fine, that’s where it’s quiet.” Her father articulated the belief that the city, by focusing policing on the waterfront properties, has concentrated crime on the west side in order to contain and address it (Raia-Hawrylak 2014).

A child who has heard a gunshot will have his or her perceptions of the surrounding neighborhood significantly, and potentially permanently, altered. Youth and their guardians alike perceived that policing resources were being dedicated primarily to the east-side businesses, and the result is a belief among both children and their guardians that the nearby area is comparatively becoming more dangerous (Raia-Hawrylak 2014). It is clear from these findings that youth living on the west side may feel less safe than ever before in the face of gentrification, and that their ability to spend time playing outdoors is restricted as a result. The areas around their homes are located in what Cagle (2012) termed “sacrifice zones,” which are areas that have not been revitalized and where poverty and violence subsequently concentrate. Violence has long faced much of the city in the wake of its decline, yet the potential concentration of disorder may lead residents to feel the effects of disinvestment even more starkly.

In the case of Asbury Park, subjects living in all parts of the city reported a perception of safety on the east side. They generally understood the investments as designed to bring visitors and dollars to the shore, which is a goal they agreed with and viewed as a benefit to the city. At the same time, they articulated a sense that crime and insecurity were increasing on the disinvested and less policed west side, where most of the city’s youth live. The number of reported shootings in the city per year doubled from 26 in 2010 to 53 in 2012, the same year I conducted my interviews. However, in 2014, increased policing in the southwest side of the city was associated with a dip in shootings over the summer (Peskoe 2014).

Shaping the future for youth, by youth

In 2014, the incumbent mayor lost her bid for reelection to John Moor, who has incorporated a commitment to the interests of youth into his agenda for leadership. Moor ran as part of the “Asbury Together” ticket of five men and women that were elected for city council. The group’s platform addressed youth interests under the subheading of “comprehensive approaches to crime” and cited expanded recreation, the creation of a youth council, and the use of social media to engage young people in their city. Members of this ticket were elected in a definitive election, and Moor, the first directly elected mayor in the city in over a century (Spoto 2014), has reiterated this goal as one of his priorities while in office.

Giving youth a seat at the table may shed light on the less discussed outcomes of gentrification that affect them most, particularly those related to recreation and personal development. This participation, if genuinely sought, considered, and acted upon, may lead to increased awareness and response to the potential insecurity for youth caused by uneven patterns of investment. The response may include low-cost recreational opportunities that youth spoke about in my interviews, such as cleaning parks and building swing sets, and monitoring them so that they are safe. Since I conducted the interviews in 2012, there have been a number of new initiatives to improve opportunities for youth in the city, but often these programs are only open to a small number of students.

In November 2014, weeks after the election, the Asbury Park Planning board green-lighted yet another luxury condominium development. In a positive and unprecedented decision, the board at the same time approved the first residential redevelopment project on a major west-side street, consisting of 64 units of affordable housing (Bartlett 2014). Going forward, similar measures should be taken to bundle the creation of new luxury attractions with new public recreational spaces. For example, a ground-up biergarten, or beer hall, which opened in 2015, could be developed alongside a community garden, or other recreational opportunities called for by youth stakeholders. If the new administration delivers on its promise of a seat at the table, youth can help shape the forecast of their own futures.